DIRECTIONS:
Mix together lettuce and onions. Add all other ingredients except noodles and set aside. Blend together dressing and just before serving, add the dressing and noodles to the lettuce mixture!!

I decided this weekend to throw a potluck dinner. While I love cooking, most of my friends love it too -- and they've been doing it for longer, meaning that their skills are a little more honed in.
One attendee brought a huge, delicious bowl of homemade guacamole (upon my request) and another friend brought a delicious mandarin salad with a surprise ingredient: dry ramen noodles! I made mini Italian club sandwiches and potato and squash pancakes while someone else brought a squash soup/puree.
While the food didn't necessarily go together, I don't think anyone left feeling hungry. I was perhaps most impressed by the squash soup. It was made from ingredients my friend found in my friend's kitchen! It was the most delicious squash-y, cumin-y, sweet and salty dish with a perfect texture. I'm still thinking about it.
There were several aspects of the potluck that were enjoyable: first, it was fun to see (and taste) what everyone brought, there wasn't as much pressure on me to provide all of the food for my hungry guests, and it was also nice to get a taste for some new recipes. Unfortunately Chris (squash-soup-chef) doesn't have a written set of instructions for his delectable concoction, but at least it gave me a new idea -- creating dishes from ingredients laying around the kitchen! It forces you to be creative, it's a great way to use up what you have, and it won't cost you anymore money than you've already spent! Who's interested in some avocado - apple - tortilla chip roulade?
at 4:36 PM No comments:

The next few days will be pretty busy for me with work but I want to give a quick update on the Christmas miracle from this weekend.
It turns out, it actually was NOT a Christmas miracle. Well, not exactly. What it actually was, was the first issue of a two-year subscription to The Food Network magazine-- a Christmas gift from my cousin Heather. How awesome is that?!?! I got a card in the mail today explaining the gift and I am so happy and so thrilled and also feeling so bad that I still have Heather's birthday present from August sitting on my desk waiting to be mailed. Eeek.
Well, Heather dearest, thank you so much!! I already tried some of the cookie recipes from the magazine and will tell you all about them shortly. However, tonight I need to get some sleep before another busy day at work.
at 11:12 PM No comments:

So upon getting the mail today.... I stumbled upon a Christmas miracle. In the mailbox, addressed to me, but was definitely never ordered by me, was an issue of the The Food Network Magazine! Holiday treats edition!
I do not know where this came from, or how The Food Network got my address, or why they decided to start sending this to me, but I am THRILLED.
There is only one answer here. A Christmas MIRACLE!
at 2:39 PM No comments:

From writer to chef: the story of unemployment.

Hi everyone!
I'm Katie's roommate, Jackie Sher. Not only do we share an apartment, bathroom, washer and dryer, but we also share a kitchen, utensils, cooking and love of all-things food. I have always enjoyed eating out, flipping through recipe books and looking at pictures of food, but never, ever thought that I would be able to assemble anything edible myself (unless it was in sandwich form with raw ingredients or made in a microwave).
I also love to write. Until recently, was paid to do it. Now I am a professional stay-at-home roommate. In my new found free time, I have learned that I *can* cook and that I absolutely love it! There is something deeply satisfying about trying a recipe that I found in a cookbook, or getting inspired by something that was made on the Food Network, and then trying it out myself. It is even more satisfying to feed these culinary inspirations to others.
Katie's mom bought her a slow-cooker a few weeks ago that was still sitting in the box. Every now and again, Katie and I would sit around flipping through recipes and picking out what looked good. Finally, we decided that this past Tuesday I would make something in the slow cooker. I picked out a chicken and mushroom merlot recipe from a crock-pot cook book. We thought this would be a nice dish because it sounded hearty and we were expecting our second snow fall of the year.
Preparation took about 40 minutes. The total cook time took about 7.5 hours. I served it with a huge spinach salad with veggies, fresh bread and some pasta that my boyfriend expertly prepared with seasonings we had laying around the kitchen. Voila! Dinner was served. And will be served again and again for the next 18 days. I made a lot of chicken and mushroom merlot.
It was (relatively) easy to make, with the exception of some cut fingers -- always use caution when working with knives -- and came out, in my opinion, deliciously. I would recommend this dish to anyone who is looking to make a hearty meal that doesn't take too, too much preparation and wants leftovers after.
Next project? I am throwing a holiday potluck tomorrow. I am going to try making three appetizers including zucchini and potato pancakes and mini Italian club sandwiches. If I'm feeling adventurous I might try my hand at making a cocktail for everyone to enjoy involving clementines and vodka ... We'll see.
As Julia Child would say, bon appetit! (This photo was taken this past summer when I held a dinner party but ordered out all of the food. However, this is a thing of the past. Welcome to the new world of Jackie.)
at 6:44 PM 2 comments:

Much to be thankful for.

It is hard to believe that we are past Thanksgiving and finishing up our first week of December, yet that is exactly where we are. As I sit in my apartment and look out the window at the first real snow fall of the winter, makeup still on my face from my first holiday party of the season the night before, I am content and happy and filled with emotions. I am slightly overwhelmed that I have yet to really begin my holiday shopping. I am nervous, that my finances won't be able to cover all of the gifts I want to be able to give to the many people who have loved me and been there for me throughout this past year. I am satisfied, although I have yet to eat today, the $2.25 coffee from the Daily Grind coffee shop around the corner is running warm through my body, which is curled underneath my gray Syracuse University blanket. I am warm. I am happy. I am a tid bit anxious but I am comfortable. More so than anything else though, I am thankful.
I am thankful for an apartment that I love being in so much. I am thankful for roommates who help me with my makeup and accessories before a night out, who comfort me when I am upset, and who make me laugh. I am thankful for my family, that spreads from Rhode Island to Massachusetts to New Hampshire to California and back. My family, who loves me and protects me and pushes me to be who I am not matter what the situation. I am thankful for my network of friends, that spreads around the world and who have known me from a range of one year, five years, or twenty years. Friends that know me better than myself and who I have no doubt in my mind will continue to get to know me as I change and grow throughout the years. I am thankful for Skype and video chatting, which helps me stay in touch with those friends, whether they be in New Jersey or Indonesia. I am thankful for my own self-conviction. I am thankful for a lot.
This past Thanksgiving was a really happy one for me. It was filled with so many people I love, so many people that make my life rich and fulfilling and happy, so much goodness, and SO MUCH good food.
I ate my first Thanksgiving dinner the Saturday before the actual holiday at my friend Andrew's house. We had a potluck dinner, with everybody bringing a different dish. This is a tradition that I had the pleasure of taking part in for the first time in 2008. I don't know if it was my state of mind or the food itself, but this year's dinner at Andrews was perfect. Everybody's dishes complemented each other perfectly even though they ranged from Persian rice to mashed potatoes to pumpkin to chili to a variety of stuffings and then oh, my, gosh, the deep fried turkey. It was delicious. 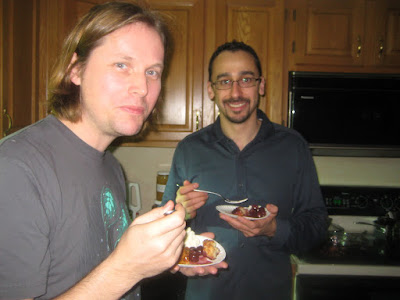 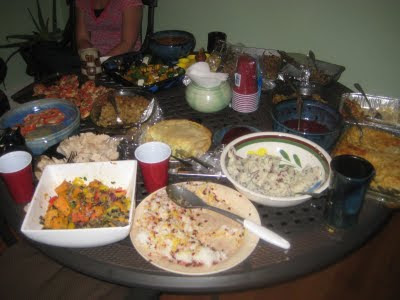 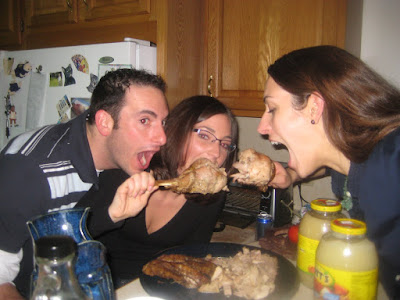 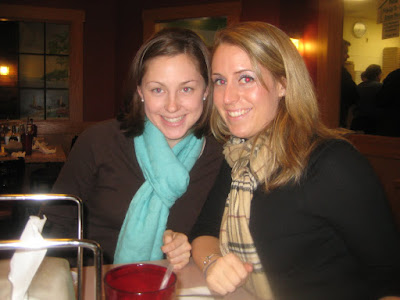 My third Thanksgiving dinner was at my grandmother's in Massachusetts. A smaller crowd than that of years past, but the room was just as full with love and laughter and over-eating. Again, it may have been my state-of-mind or it could have been the actual food, but everything tasted more delicious than ever. And for the first time in my life, I ate gravy. Yum, yum, yum. 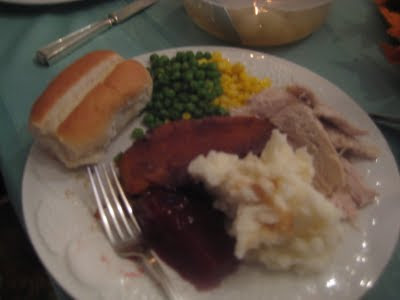 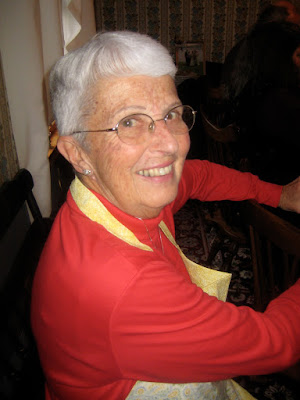 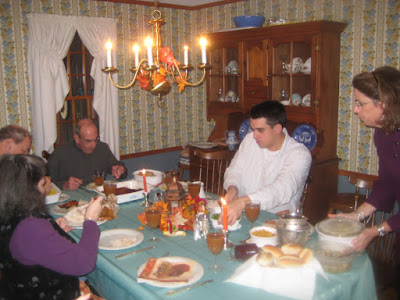 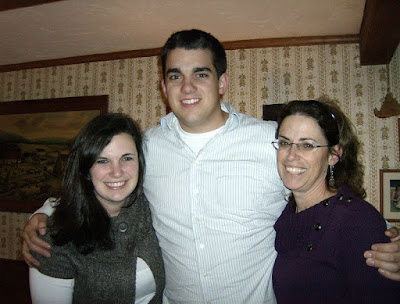 (if you know my family... tell me if you notice anything about the photos below... hehe) 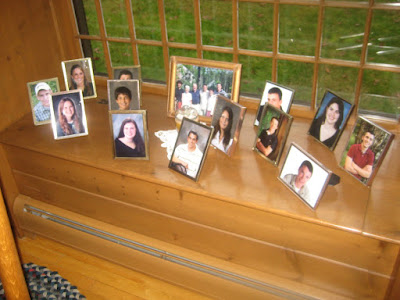 My fourth Thanksgiving dinner, which was actually a lunch, was at my Dad's on Friday. Again, lots of laughter and love and food. This year brought new family members to the table and new excitement for all of us. 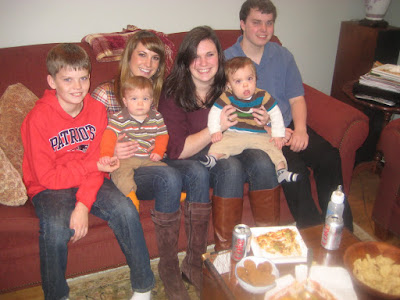 My fifth, and final Thanksgiving dinner took place at a bar in Manchester, NH with my sister, her husband, her sister-in-law, and her sister-in-law's boyfriend. Chicken fingers and potato skins. Not the most traditional, but it was fun. It was a meal that I am again, incredibly thankful for. I had a wonderful night visiting my sister and her husband. Our relationship has progressed so much throughout this past year and we have some amazing memories to take with us into 2010. 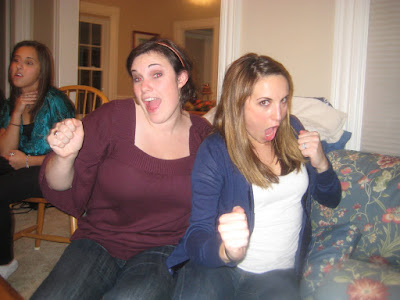 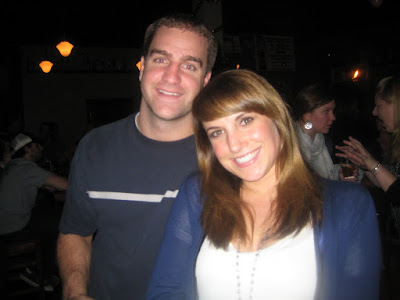 So there you have it. My Thanksgiving in pictures and food and memories. Outside, the snow continues to fall. Accumulating now and covering the rooftops and tree branches in a soft blanket of beautiful white. My coffee is finished and my stomach is starting to rumble. No big cooking plans today. Perhaps tomorrow. Today I am enjoying the beauty outside and am thankful for all the beauty within my life as well.
Happy holidays.
at 4:00 PM No comments: