Update: I did better than I thought!

Just a quick update... I checked the results on the Freihofer's Web site and my actual race time was: 37:40 minutes and I ran at a pace of 12:08. I know that is probably way slow for a lot of people's mindset but I'm proud of myself.

For the past year and a half I've been living in a beautiful 4-bedroom apartment. Throughout the time we've been here, we've had a bit of revolving door of roommates. Although there are definitely some hassles that go along with living with so many people, there is also many benefits. One of which for a food lover like me is getting to share a kitchen with people of different backgrounds, nationalities, tastes, preferences, etc. I definitely must say that many of my favorite recipes and food insights are inspired by my roommates (my other inspirations are my mom and the Food Network). One of the most notorious roommate-inspired meals is breaded chicken wrapped around mozzarella cheese in white wine/garlic sauce. I will forever think of 604 Walnut when I make mozzarella chicken (an apartment speciality).
Last week one of my good friends moved into my current Albany apartment and with him brought a box full of new spices and flavors that are new to my taste palate and cooking styles. My most recent roommate, Bahman, is from Iran and as I just learned today, he is an incredible Persian cook. For dinner tonight Bahman made Ashton and I chicken, steak, and rice. He marinated the chicken in saffron, onion, and olive oil. The steak in oil and onion. He made saffron rice, grilled tomatoes, and served with a post-cooking sprinkle of a spice brought from Iran called Sumac. It was all DELICIOUS.
One of the coolest things about Bahman's meal was that he was also able to tell me a bit about the spices and the meal that he was cooking. The saffron comes in a tiny, tiny tin and is steeped in hot water before used to marinate the chicken. The saffron is brought from Iran and is actually more expensive than gold due to the laborious process of hand picking the saffron from the flowers, then drying and curing the saffron. The rice that Bahman cooked us was made in a way where he boiled the rice with water, drained the rice and rinsed with cold water, and recooked on the hot water with saffron. This way, although delicious, loses some of the nutrients and in Iran, you'll see a lot of men with protruding bellies-- which isn't a beer belly but a rice belly!
I'm looking forward to learning more about Persian cooking and foods and very thankful to have a roommate who is nice enough to cook for me and share his culture with me!
at 6:00 PM No comments:

This weekend was absolutely wonderful. Saturday AM I ran my first 5K of my life. Although I ran in he 2005 Arnold Mills Road Race and then a few weeks ago in the Corporate Challenge road race... this race was the first that I was able to complete running the whole time! I ran the race in 38 minutes and 45 seconds. It was quite an accomplishment for me as I have always, always struggled with running. During elementary school gym class I was a member of the "slow poke's club" and not even Mrs. Kenwood's cheers of "Let's go joggers!!!" could motivate me to even run a mile. In middle school I was on the cross country team but just walked the runs, socialized, and snuck off the paths to find little streams and rivers to play in. In high school, I swam, joined the track team as a thrower, and played on the line during flag football-- anything and everything to avoid running.
But after months of training and hurt knees and physical therapy and icing and stretching... I ran for 3.2 miles without stopping! It is a big source of pride for me.
I prepared for the Saturday morning run by eating a nice meal of carbs on Friday night. I hadn't had a bowl of pasta in a while so I planned to make it special by recreating a meal that I
have eaten time and time again while at my favorite restaurant in Florence, Italy. Attached is a picture of this amazing meal at a trattoria called Mastrociliega. 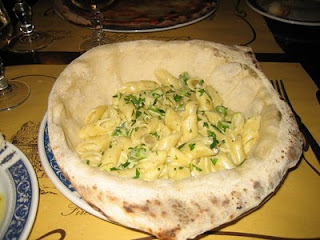 The menu in Italy says it is made with gorgonzola cheese and truffle. There is asparagus in the dish and penne pasta. To try and recreate this meal, I first bought a bottle of truffle oil from a local specialty italian deli for $23.95. I had some fresh asparagus and a block of fresh gorgonzola cheese.
To make the sauce, which isn't very thick, I first started melting some (a lot) of butter in a pan and adding a small amount of the gorgonzola cheese. Right from the beginning, it was smelling good in the kitchen. I had been planning on adding some flour to the butter to make a rue and make the sauce a bit thicker, but alas, we were out of flour so I couldn't do that. I also wanted to add some milk to the dish... all we had was skim milk, which was a bit thinner than I wanted but I tried it anyway. I let the milk, butter, and cheese melt and simmer together and reduce. The truffle oil smelled amazing and it was the last thing I added. I also put a bit of salt into the sauce.
I boiled and salted the water, cooked the pasta, and for the last 3 minutes of the pasta cooking I dropped the asparagus into the water. I drained everything and mixed the sauce and the pasta. I finished it off with a bit of fresh grated mozzarella cheese. 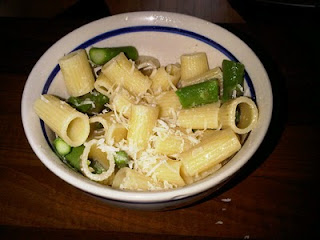 Now, I don't think anything can compare to the dish that is made at Mastrociliega's but I have to admit. It was really, really good. And I still have a TON of truffle oil left so definitely more to come. I think in the future I will try the dish again using some flour to make a rue and using a fattier milk. Definitely not a diet meal... but it was good. Perhaps it will be a pre-race ritual for me??
at 5:38 PM 1 comment: