Brazil Recap: What I ate in Rio de Janeiro!

Okay, so it may have been over a month ago at this point, but I don't want to miss out on telling you guys about the delicious food I ate when I was on vacation in Rio.  I really, really enjoyed exploring the new cuisines and foods of Brazil.  It was so great to have ICT be able to recommend restaurants, foods, grocery stores, etc. in her neighborhood.  I would not have had such a great culinary experience if it weren't for her!

I tried so many new flavors and tastes in Rio, which was really exciting for me.  There were many tropical fruits that I wasn't familiar with or don't normally eat.  Mango, passion fruit, coconut, acai, and cashew fruit are just a few.  Did anybody else not know that cashew nuts came from a fruit that you can eat?  Was that just me?

One of the things that I loved about the food in Brazil is that it was healthy and fresh.  Most foreign countries I think rock at the "fresh" food thing but I loved that when you walk along the beach in Rio, the snacks you can purchase are really light.  Fresh cut up mango, corn on the cob, coconut water, frozen fruit-only popsicles, fresh blended fruit juices, and light puffed rice snacks.  All of which I ate, obviously. 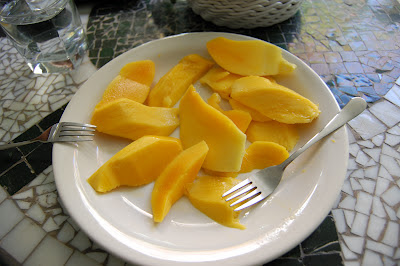 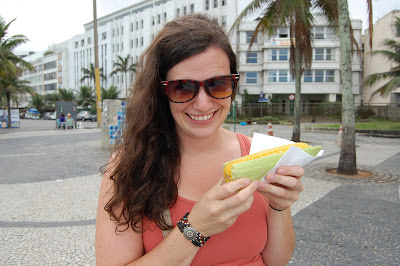 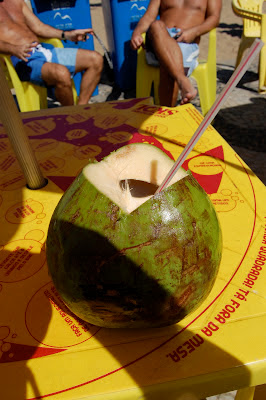 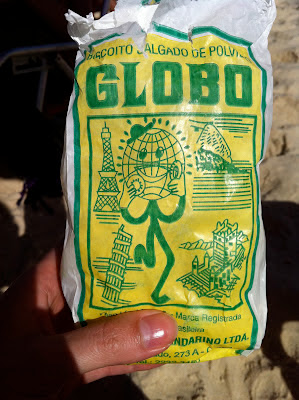 One of the neatest meal concepts that I got experience was the "pay by kilo" restaurants in Brazil.  Restaurants will have a full buffet of incredible food but different that the American "all you can eat" buffet varieties, in Rio, you pay for what you put on your plate.  I thought that was a really neat option because you can decide exactly how much you want to eat-- and, for indecisive eaters like myself, you can try a bite of everything if you want!  Which I did.  On multiple occasions. 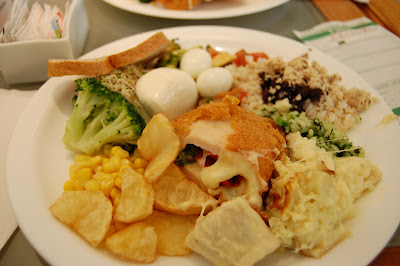 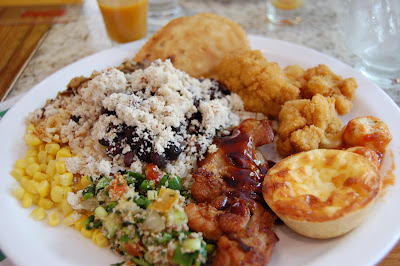 One of the things that you see on my plate in the pictures is a traditional Brazilian dish called Feijoada.  It is a rice and bean dish, topped with a cooked grain type thing.  It was sooo delicious and I bought the ingredients to be able to try cooking it sometime here.  I am positive I will not be able to recreate this exactly but it was incredibly flavorful with lots of different textures and I just loved it.

So we've covered snacks and meals in Brazil.  So the obvious next place to go is desserts.  Man, Brazil does things right with the chocolatey dessert I fell in love with: brigadeiros.  This gooey chocolately deliciousness is a consistency of maybe a thick peanut butter, then covered in one of my favorite things in the world, sprinkles.  I made it my mission to try brigadeiro whereever I saw it.  Which was sort of often... but hey, you only live once!  My favorite brigadeiro, which is in the bottom two pictures, was at the Parque Lage.  So yummy!

The recipes make it seem incredibly simple to cook, there is only a few different ingredients.  I've attempted once so far and it came out an utter failure.  I WILL try this again though.  It is too good not to! 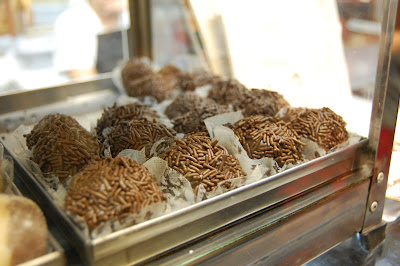 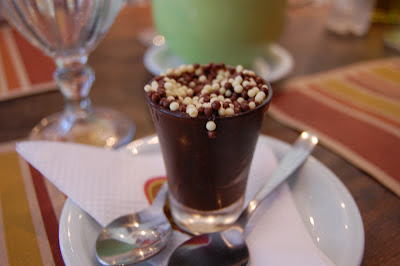 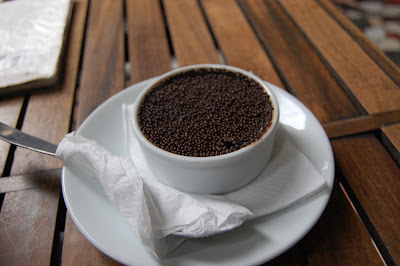 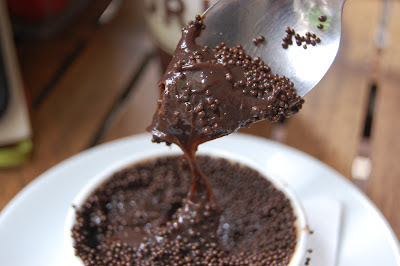 Another area that Brazil really does it right is in the drink department.  In addition to trying brigadeiro all throughout Rio de Janeiro, I also tried as many different caipirinhas as I could!  A caipirinha is a cocktail made with an alcohol called cachaça and all different fresh fruits as well.  They were delicious!

In no particular order, I wanted to share a few other food items that I had in Brazil that I loved.  I seriously ate so well the entire time I was there.  Even the meals that we had in ICT's apartment for breakfast or dinner were incredible.  And you want to know the best part?  Even though every single thing in these photos I ate (every bit of)-- I lost weight while I was in Brazil! 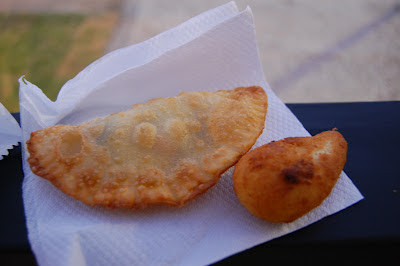 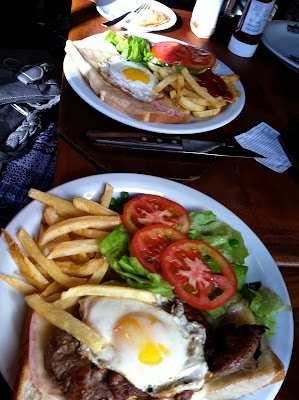 In the U.S. we have such problems with obesity and I love visiting other countries and learning about the ways they eat and comparing to how we do things here.  In the U.S. we have "all you can eat" buffets that encourage you to eat as much as you can and GIANT portions in restaurants that you feel pressured to eat because you've paid for it -- you've got to get your money's worth, right?  Where as in Brazil, you pay for only what you want to eat.  The fresh fruit snacks were the norm.  Not deep fried or processed snacks we do in the U.S.  And the Brazilians don't deprive themselves either -- do you see how rich and indulgent those brigadeiros are?  However, the portions are so small compared to the massive pieces of cake and sundaes you get when you order a dessert in the U.S.

Although I can't eat the delicious food I had in Rio de Janeiro every day, I can take some of these lessons with me back to the U.S.

1.  Only eat what you are hungry for.
2.  Snack healthy!  Fresh and unprocessed when I need a pick-me-up.
3.  Indulge -- in appropriate portions.

So, did I make you guys hungry yet?? :)  Hopefully I will share some of my culinary adventures in the future as I try to make some of the things I had in Brazil!

SCIENCE VIDEO: Why we overeat.

I get it and all, but sometimes the answer to the question, "Why do we overeat?" is because food tastes really, really freaking good.
That is all.
at 7:00 AM No comments: