Lately I have been reading and hearing a lot about "mindful eating."  The concept is something that almost everyone is familiar with -- eating slowly and enjoying your food.  However, mindful eating, incorporates a lot more than just eating slowly.  It has roots in Buddhist teachings and encourages the eater to focus all of their attention on the food at hand.  The scent, the flavor, the feel of each bite in your mouth and the satisfaction of each and every swallow.  This practice is supposed to help you to pay more attention to how each bite is feeding your body and your soul, where so you will get more satisfaction from your food and also be more in tune to when your body is full or what it actually needs.

I myself have challenged with this for a long time.  I am a very fast eater and have always fought with myself to eat slower.  The concept of "mindful eating" is something I am going to try to practice more in the next few weeks.  The New York Times posted an article a few weeks back called "Mindful Eating as Food for Thought" which said,

"For many people, eating fast means eating more. Mindful eating is meant to nudge us beyond what we’re craving so that we wake up to why we’re craving it and what factors might be stoking the habit of belly-stuffing."

As I get into mindful eating, I will be trying to use some of the advice recommended by Summer Tomato's "9 Simple Tricks to Eat More Mindfully."  Some are tips that will forcefully slow down your eating -- such as using chopsticks or eating with your non-dominant hand.  Others just urge you to be more in touch with your senses -- such as eating in silence or taking your first bites with your eyes closed.  This could be interesting if eating at a restaurant :)

Does anybody else practice mindful eating?  What are your thoughts?
at 9:00 AM No comments:

The past few weeks have been a bit surreal.  I'm still getting settled into my first "big girl" apartment (my new couch arrived yesterday!); I started a new job that is challenging, exciting, and keeping me very busy; and I reached a milestone in my weight loss that I have been working towards for over a year now.

Although I've mentioned many times that I've been exercising, eating healthier, and been a fan of Weight Watchers, I've never actually written about my exact goals and what I've been working towards.  Last January I began a journey that I honestly, didn't really believe I could or would ever finish.  I joined Weight Watchers in January 2011 and was very open with friends and family about what I was out to achieve.  When asked about what I was trying to lose or what my overall goal was, I always had the same answer, "To be healthy."

At the time, it seemed so far away.  The goal of being within the "healthy weight range" for my height felt like light years to reach (as defined by Body Mass Index, which, I know is a system that has many flaws, but that's another story and another blog entry.)   However, I broke it into smaller goals.  Smaller steps, smaller achievements, smaller victories, that kept me motivated and keeping with it.  And I made sure that some of those goals were non-scale victories, such as my achievements in running.

It took me a little while to let it soak in and want to post this here, but a couple weeks ago, I finally achieved that overarching goal that I had set my sights on more than a year ago.  At my Weight Watchers weigh-in on March 14th, for the first time my weight was within that "healthy weight range."  Just barely made it under the cut, but the scale didn't lie.  I am "healthy."  And this isn't just the first time in recent years, but the first time in my life that I can call my weight healthy.

To say that I didn't get emotional would be a lie.  There was such a rush of emotions, that at first I couldn't tell if I was crying because I was happy or sad!  I later posted my accomplishment and the overwhelming feedback I received from my family and friends was outstanding and emotional in itself. 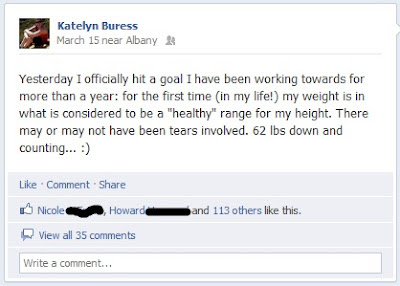 I still have another 10-15 lbs I would like to lose, but I am confident that I will be able to do that.  I'm looking forward to the summer months where I will feel confident and proud in my summer dresses and at the beach.  But more importantly, I'm excited to reach my goal of running a 5K in under 30 minutes now that 5K season is here.  I'm excited for the triathlon that I signed up for in August.  I'm excited to try some hikes in the Adirondacks.  And I'm excited for fresh summer vegetables on the grill and the knowing that I can be healthy and also not give up my love of ice cream and frozen yogurt (is it a coincidence that "5K season" is also "ice cream season?  I think not.)

A big thank you to everybody here who has read, commented, and therefore supported me throughout this journey.  I look forward to going the next leg of this journey with everybody!  I've got more weight to lose, more races to run, and as always, more recipes to share.  Stay healthy, everyone!

Sometimes I impress myself.

Last week I finally tried out my Mediterranean Curry Cous Cous I had mentioned that I've been saving.  I roasted some summer squash, sauteed chopped mushrooms and onions, and spinach.  The vegetables I seasoned with salt, pepper, tumeric, paprika, cumin, and a tiny bit of cinnamon.  I mixed this together and made 4 servings out of it.

Seriously, sometimes I impress myself.  These are flavors I very rarely use and am not confident cooking with.  As well, this was my first time cooking with summer squash!  (A bit delayed, but trying a new vegetable was one of my February goals.)

Despite the new flavors and new vegetables.  This came out DELICIOUS!  I just finished all of this and I cannot wait to make it again. 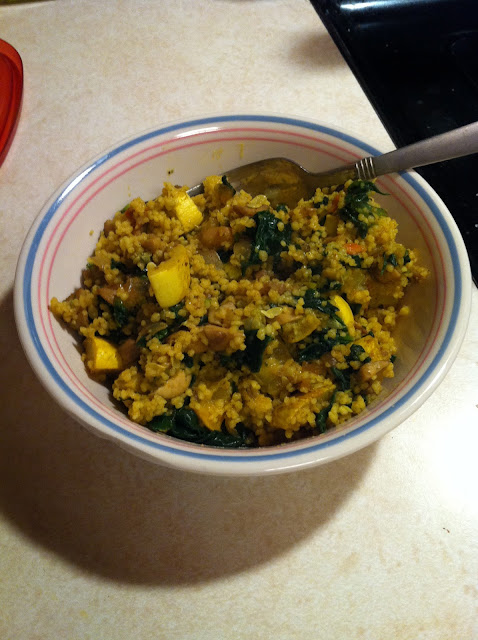 Coffee vs. Tea: Which are you?

As those of you who read my list of goals for the month of February know, I had chosen to give up coffee completely for the month.  This goal prompted some questions as to why I decided to do this.  Well, I had wanted to give up coffee for a while but have frankly, had not been willing to actually do it.  Even though sometimes coffee gives me heartburn and a stomach ache, sometimes it makes me feel jittery, and sometimes I felt like the caffeine was affecting my sleep (even if I wasn't drinking coffee anywhere near bedtime) -- it was not an easy choice for me.  To me, coffee is warm and comforting. Holding a cup of coffee soothes me.  Coffee tastes good.  I like things that taste good.

I recently read an article in the print version of Health magazine that talks breaking bad habits by replacing them with a new one.  So, for the past few months I have been trying to get more into tea.  I have read many times about the benefits that can come from drinking tea.  And tea can be warm and comforting.  Holding a cup of tea can be soothing.  And ya know what?  Tea tastes good!  For some reason drinking decaf coffee seems crazy.  But drinking decaf tea seems perfect.  There are so many different flavors and types of tea.  Fruity teas.  Savory teas.  Peppermint teas.  Sleepytime teas.  Green teas.  I know none of those are the "official" names of the types of teas and you can probably be reading the blogs of a hundred tea officianados right now that will tell you all about the greatness of different types of teas.  However, afficianado I am not, but converted tea fanatic I am!

For the whole month of February, I didn't have a single cup of coffee.  I am proud of sticking to that goal and feeling good about what I had been doing until I read this article in SELF magazine blog that made me question what I was doing.  The article, debates which is better for you coffee or tea, and rules it a tie.

One thing I learned from the article was that espresso can be easier on the stomach of those who usually get indigestion from coffee.  And you still get the benefits of coffee.  Honestly, I got kind of excited when I read this because I realized thinking back that espresso never made me feel ill.  Lattes and cappuccinos never gave me a stomach ache.  I may not have to give up coffee completely and can probably continue having it as an occasional treat.  As we're now into March, I've afforded myself one or two skim milk lattes as special treats but on a day to day basis, I have continued my love affair with tea.  I love trying new kinds and have successfully replaced my morning cup of coffee with a cup of tea.

What does everyone do in the blogging world?  Are you a tea or a coffee drinker?
at 7:15 AM No comments:

Eating well on the West Coast

I haven't treated you well my blogging friends, but I will always return to you.  That promise I can keep.  I am loyal if nothing else.

Tonight I wanted to write about my trip to California and share some photos of the delicious food I had there.  It is no secret I love to travel.  And for me some of the most fun I have when traveling is trying new restaurants, new dishes, new local foods and well, over-indulging, to be quiet honest :)

My recent trip to California brought me to San Diego and LA.  I had a wonderful time exploring both cities, seeing friends, and simply relaxing in the sunshine.  San Diego has incredible Mexican influences in the food.  Los Angeles was somewhat of a melting pot with many international flavors and healthy options.    I loved every bite of food I had in both cities and that I was able to enjoy it with such wonderful friends.