Hey everyone, I hope you had a great weekend!  I had a very nice, albeit low key weekend in Albany with a half day trip out to Utica today to run the Utica Boilermaker 15K race!  My weekend all revolved a bit around the race.  I stayed in on Friday after work because I was really exhausted and just fell asleep on the couch.  And I started Saturday with the same circuit workout I did last week, followed by a trip to the Troy Farmer's Market.

It was a hot and sunny day so a perfect time to walk around the market with good friends, exploring the produce.  I picked up some veggies, granola, and a new headband (I know, random, but there was a cute vendor!) before heading from there to Trader Joe's to do a little more grocery shopping.  I knew I wasn't going to want to do much after the Boilermaker so I wanted to get some of my things done for the week on Saturday rather than on Sunday. 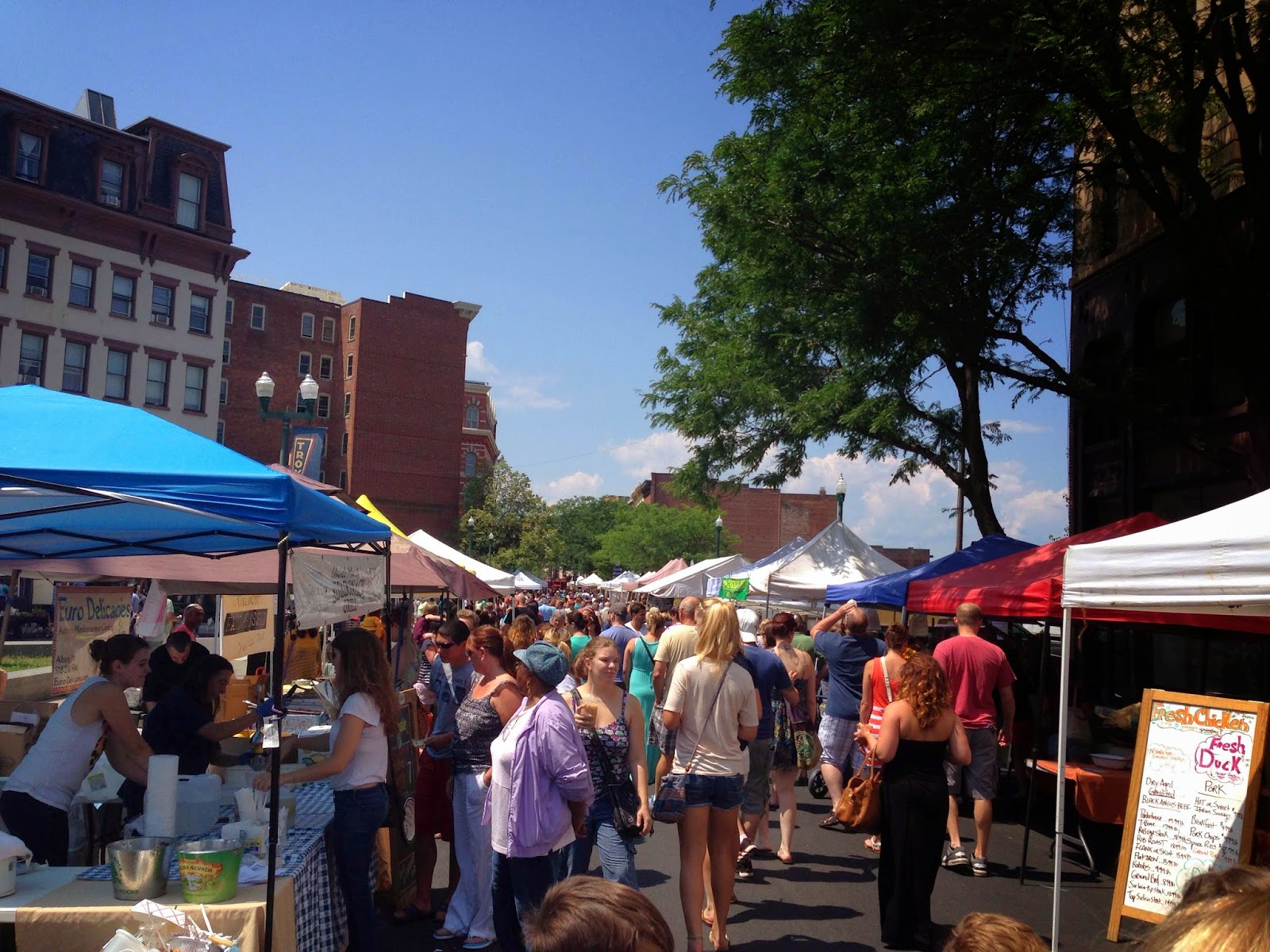 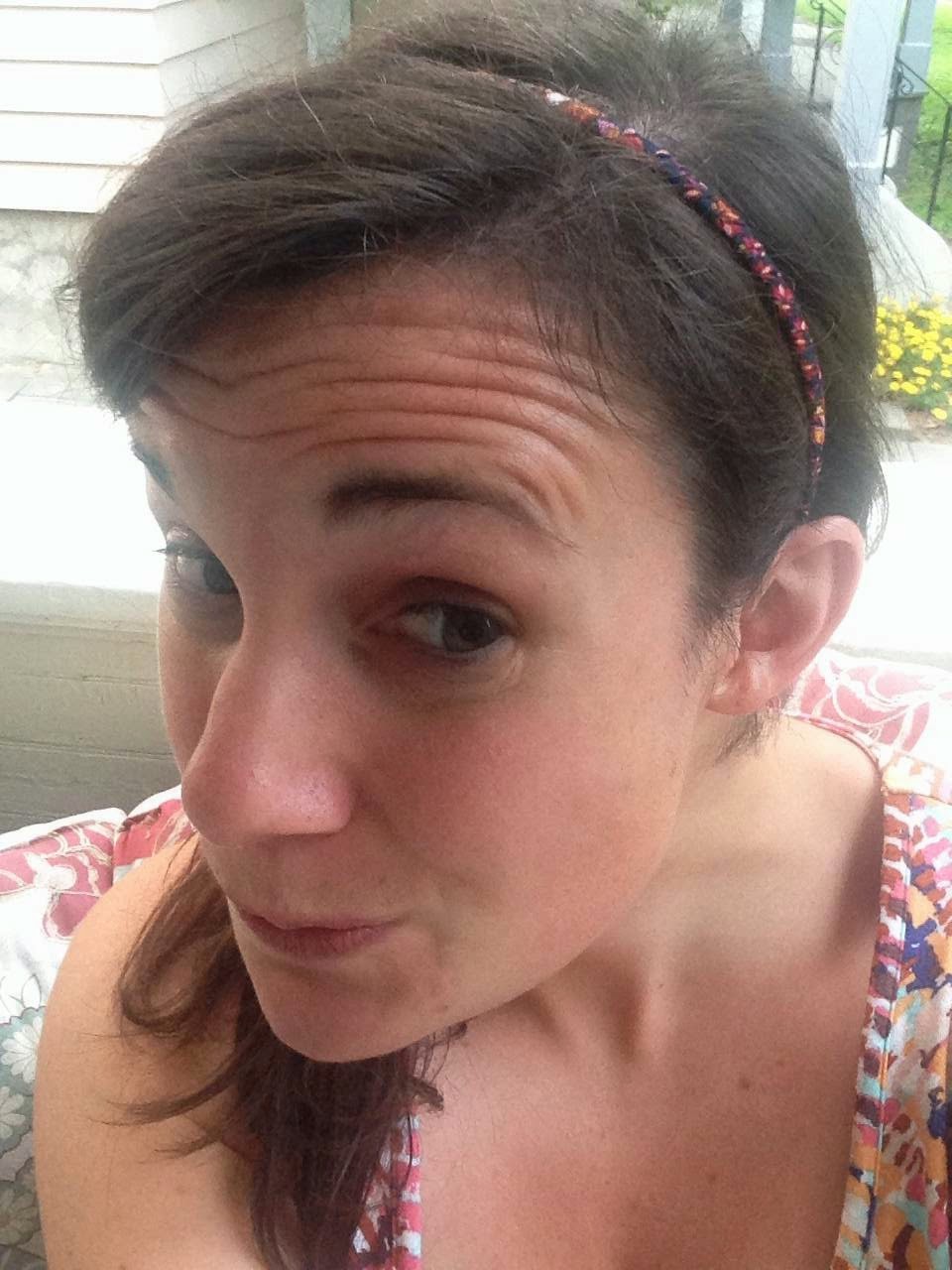 I lay low the rest of the day and went to bed way early.  Earlier than I do during the week.  My alarm for this morning was set for 3:50 a.m.!  In reality, that's only an hour earlier than I usually wake up on my morning run days but mentally, it felt like I was waking up in the middle of the freaking night.  Oh, the things I do for running!

I met up with two friends to carpool out to Utica, New York so that we could check in early enough to get our bibs and have time to use the bathroom, warm up, etc.  It started out pretty empty but slowly started to get more and more crowded as the people started to show up.  There are 14,000 people that were signed up to run the Boilermaker this year, so it was sure to fill up!  They had corralled race start and per usual, I was in the back of the pack.  I love the progress that I am making running, but it is pretty discouraging to always be in the back of the pack, but whatever. 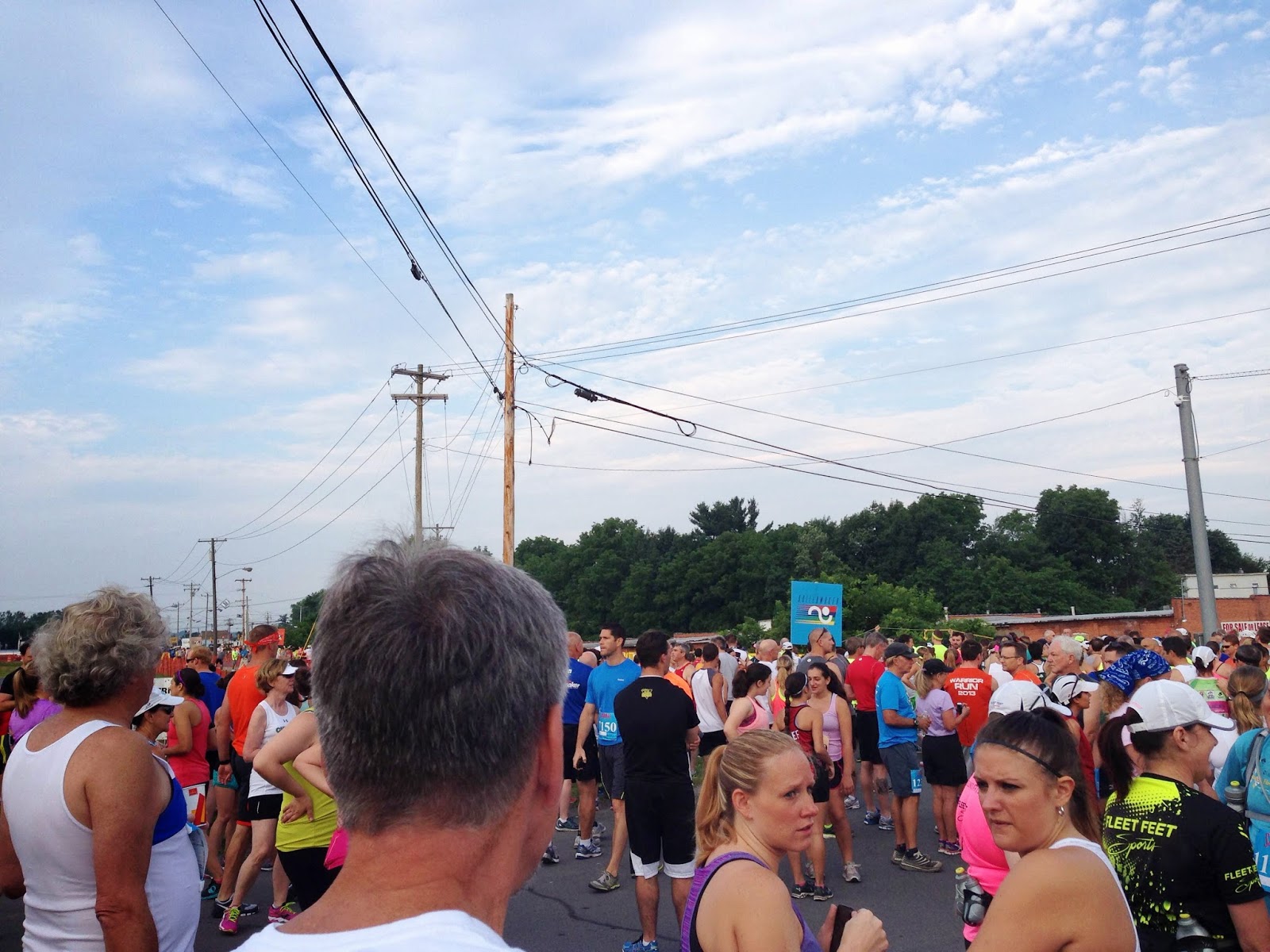 The race started and it took me around 6 minutes to get across the start line, and once I did, there was quite a bit of weaving that I needed to do to get around the other runners and find a good rhythm.  The first two miles went by pretty quickly and I started to feel tired between 2 and 3 and it felt like it got a lot steeper.  I knew from looking at the course map online that the race was uphill until mile 4.  I started to really feel the steepness at the 3 mile marker and getting to the top of the elevation really did suck.  My legs were tired and I finished the first 5K in 29 minutes so I knew I wanted to try and run faster when the race started going downhill. 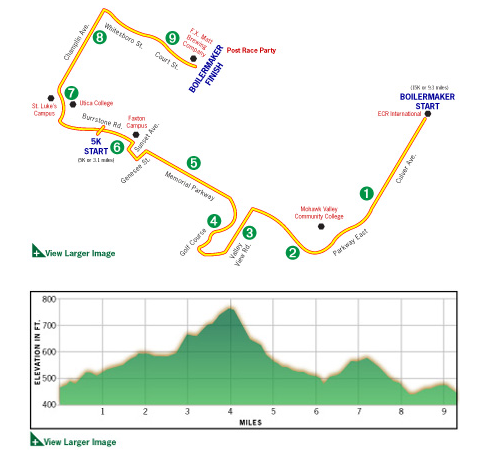 The downhill was nice, although hard on my knees.  For the first time in a race running, my knees hurt.  I also started to feel really really hot at around mile 5.5.  I knew that I needed to hydrate and keep my skin cool so I grabbed as much water as I could at the water stops, drinking it and dumping it on top of my arms, back, and head to try and stay cool.  I realized while I was running that I probably had not hydrated well enough before the race started, which was silly of me.  It was also a humid day, although not entirely sunny.  I am not sure otherwise why I got so warm today, I usually do well in the heat.

I tried to manage the heat with water and fight through the last miles, keeping my pace as much as possible.  I thought of the run as three 5Ks but I wouldn't be lieing if I didn't say this was a tough run!  The hills were a challenge the whole way through.

I was so happy when I finally saw the finish line and sprinted in.  Right when you crossed, there was no water or anything and you had to walk a ways before they had any sort of refreshment which was sort of annoying.  I also was a bit confused because they split the finish shoot into two paths, and as I was supposed to meet my friends, I wasn't sure which way to go.  I picked a path, and luckily found my friends where they finally had a water station.  I grabbed two cups of water, drank some right away and then grabbed more.  They had chocolate milk and fruit cups at different places and it was all very confusing because I am used to bananas, oranges, bagels, etc. right at the finish.

The finishers shoot ended with people handing out a pin that said "Finisher" and then you kept walking a ways until you got to the entrance to the post race party. 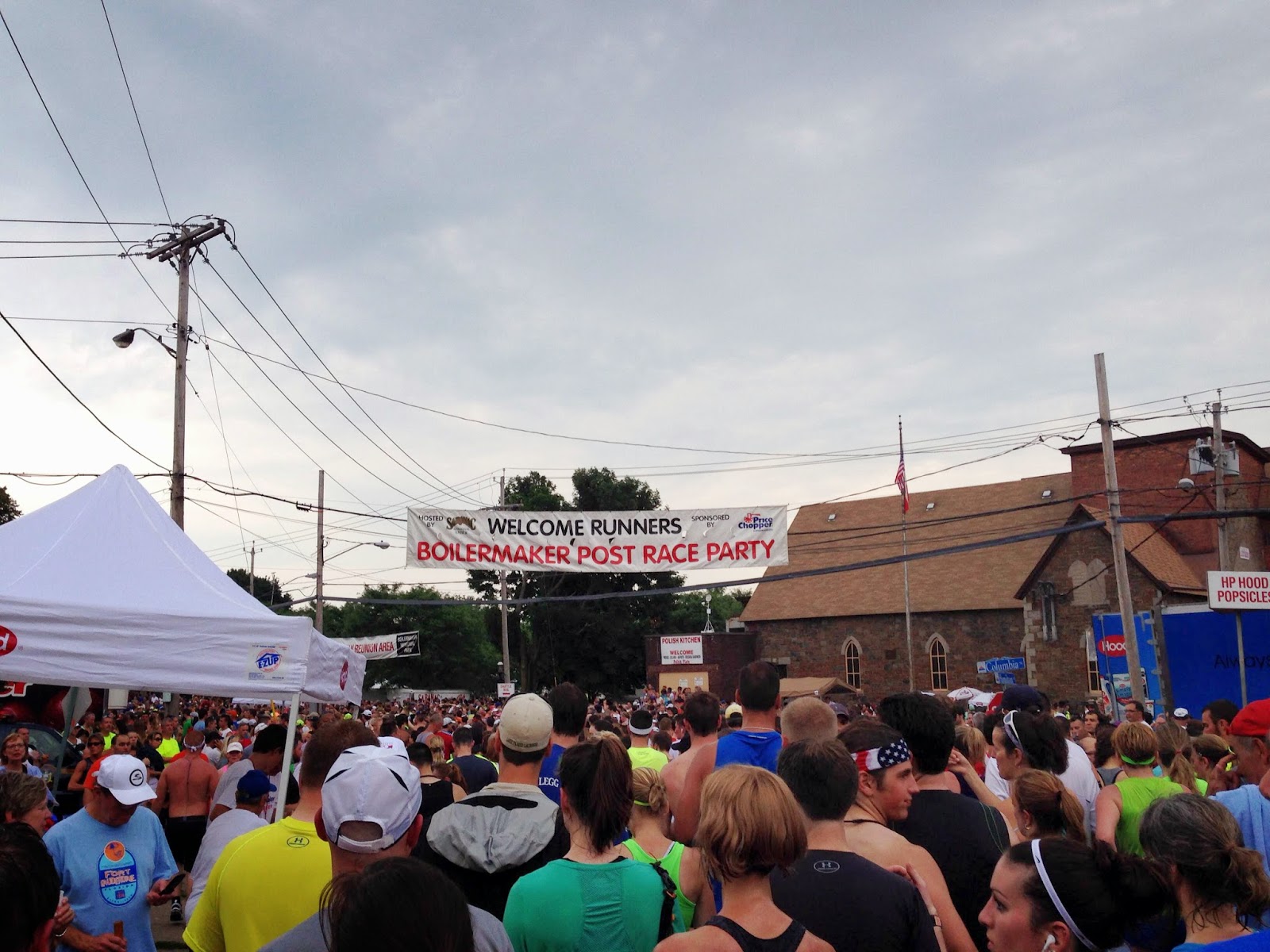 I honestly found the whole finish to be very confusing and just weirdly set up.  I didn't understand why they wouldn't have any food or more water closer to the finish.  I didn't know where I was walking to, but just following the crowds.  And when we finally got in to the Post Race Party, I still didn't know what to do.  All I wanted was a banana or something to eat but I couldn't figure out where to go. 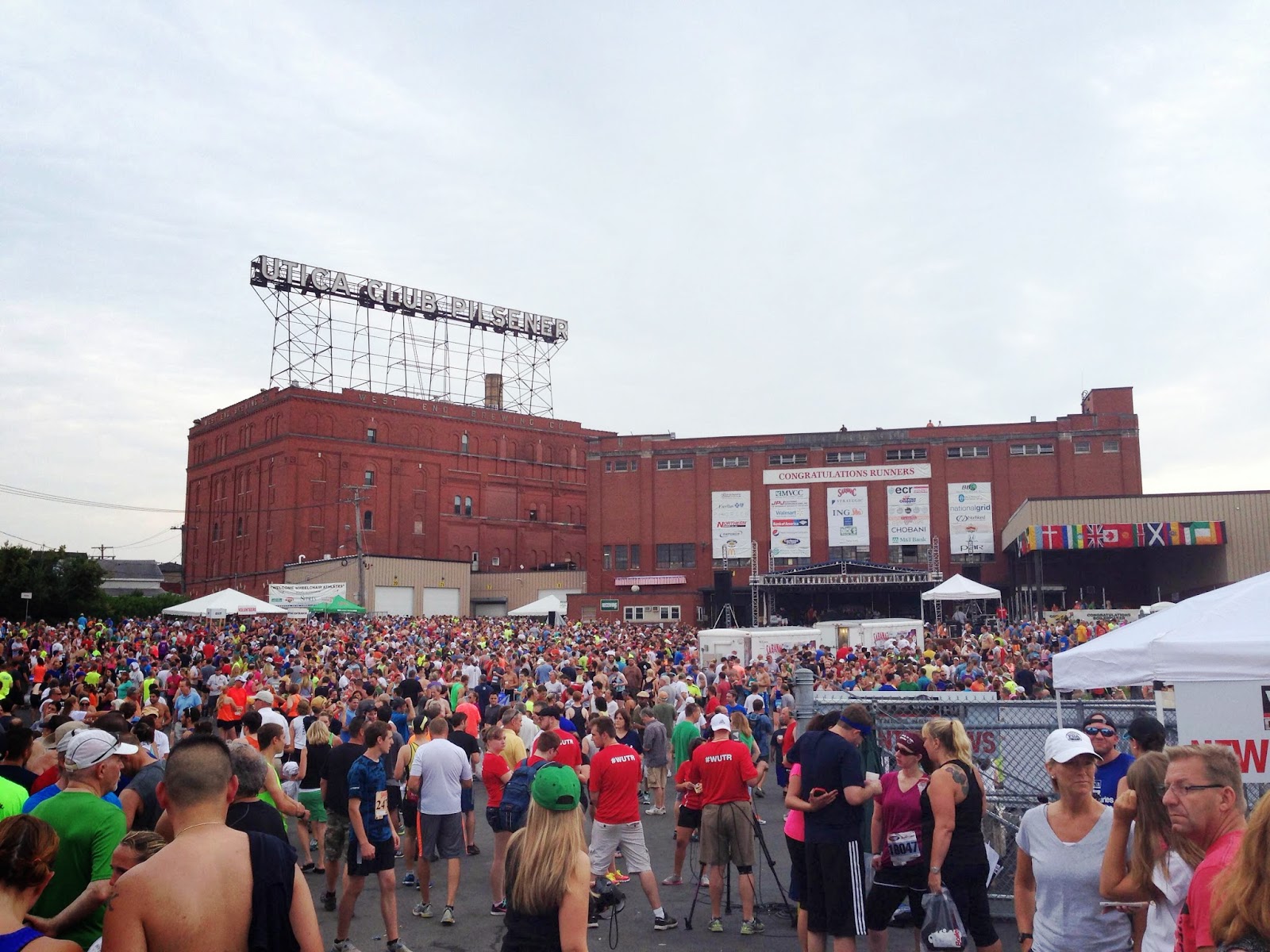 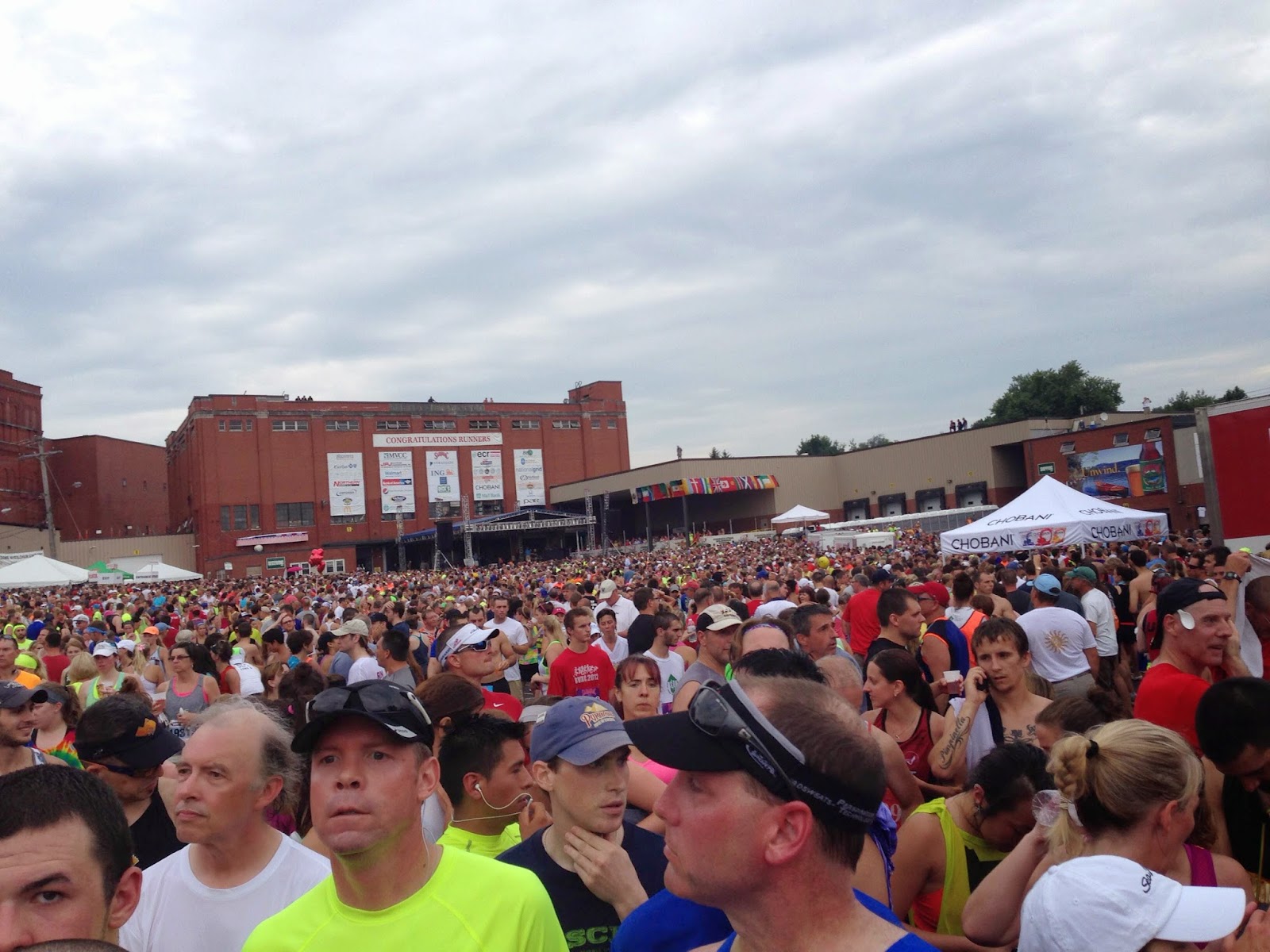 There were TONS of people, and by asking a few different people where to go, we found a beer truck and I was poured a very hoppy Saranac beer, which is just not the kind of beer I like.  And is also not exactly what I consider to be that refreshing after a hot 9 mile run.  I sipped it slowly though and kept trying to find myself a banana or something to eat.

The next vendor tent we stumbled upon was Chobani Yogurt.  I grabbed a yogurt, but again, that was really not what I was interested in having at this point in time.  I saw people with granola bars and bananas and wanted them so bad!

Finally, we saw the Price Chopper vendor truck, which, we realized the key to this whole operation was that the individual vendors had their own stations that they set up however they wanted.  The Price Chopper tent had all sorts of things I DID want like the granola bars, bananas, and chips.  However, they also had a ridiculous line that they had set up, that was bottle necked so bad and we stood there for a while not moving at alllll.

So close, yet so far. 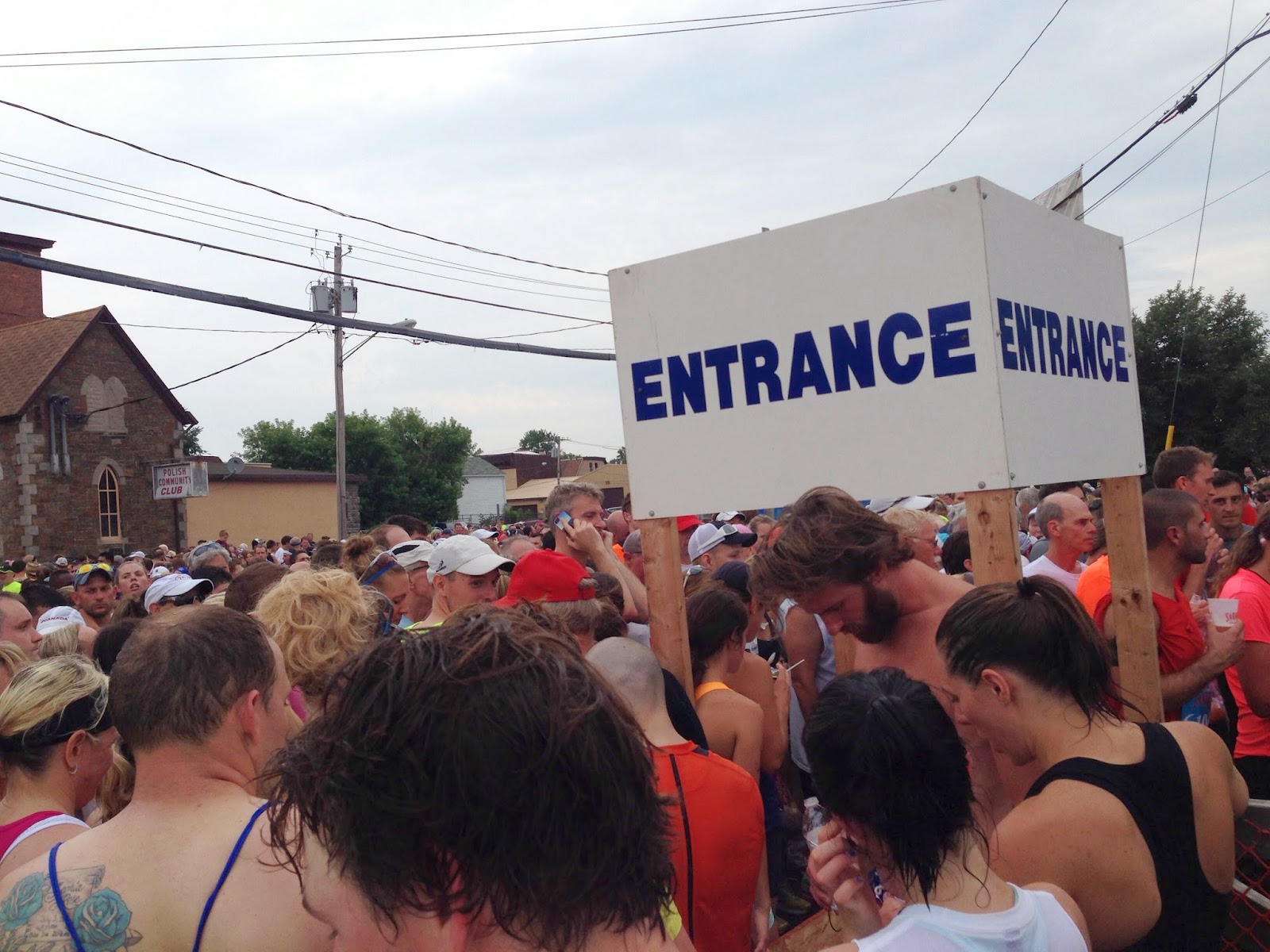 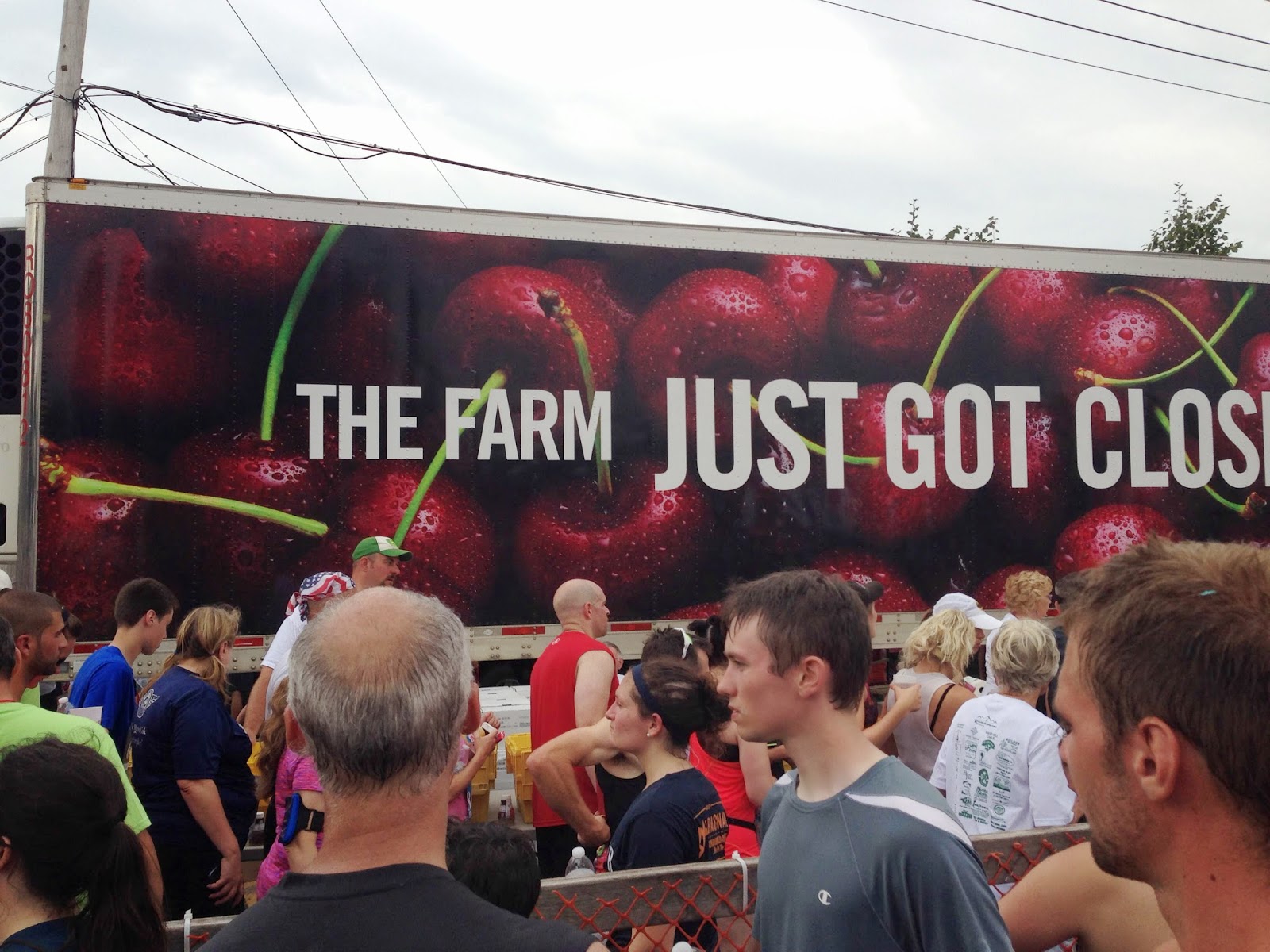 I had enough of squishing up against hot and sweaty other runners and getting no closer to the bananas, so we ended up just abandoning the line.

We walked around a little bit more, found more people that we could ask where to get the finisher goodie bags that apparently existed and were directed to another side of the post race party.  We were able to get in and out of that exchange pretty quickly, getting a plastic Boilermaker bag and a Boilermaker pint glass.

After all of this, we were pretty hot and tired, still needing food, and I had no interest in getting another of the beers that I unfortunately did not like.  So, we headed out.  We took the shuttle back to the start line, piled our sweaty and gross selves into the car, and drove back home.  I was so wet and gross and sticky and smelly, I felt bad for my friends who had to smell me the hour and a half drive back from Utica.  I also had been drinking so much water that I had to go to the bathroom the whoooole ride home.  However, I had packed some peanut butter and banana which tasted delicious on the ride home, as well as some grapes I had brought with me as well.  And the shower that I had when I got home?  It was pretty spectacular.

And I was so glad that i had done my grocery shopping and things the day before.  After I cleaned up I lay on the couch with A) An egg, tomato, cheese and avocado burrito, B) A protein drink with the new Muscle Milk Light Cookies And Creme protein powder that I just got in the mail (soooo good!), C) A coffee that I had picked up at Dunkin Donuts, and D) Ice water.  Everything tasted like the best food I had ever eaten in my life.

So, all in all, I didn't get the Boilermaker Post Party experience that the race is so famous for.  However, I am so glad that I did this race.  It is iconic in Upstate New York and I have been wanting to do it for years.  The course, although challenging, had a great atmosphere and the fans were AMAZING.  There were great bands, DJs, music, funny signs, and people all throughout the race course giving out water, popsicles, orange slices, straying water, and even one group offering a box of donuts!  I finished the race in 1:29:35, which is a much greater PR than the last 15K that I ran in November, that I finished in around 1:37.  I wish that I had run a little faster, but it was a hot, hilly race, so I am glad that I did it and had an awesome time at the Boilermaker today! 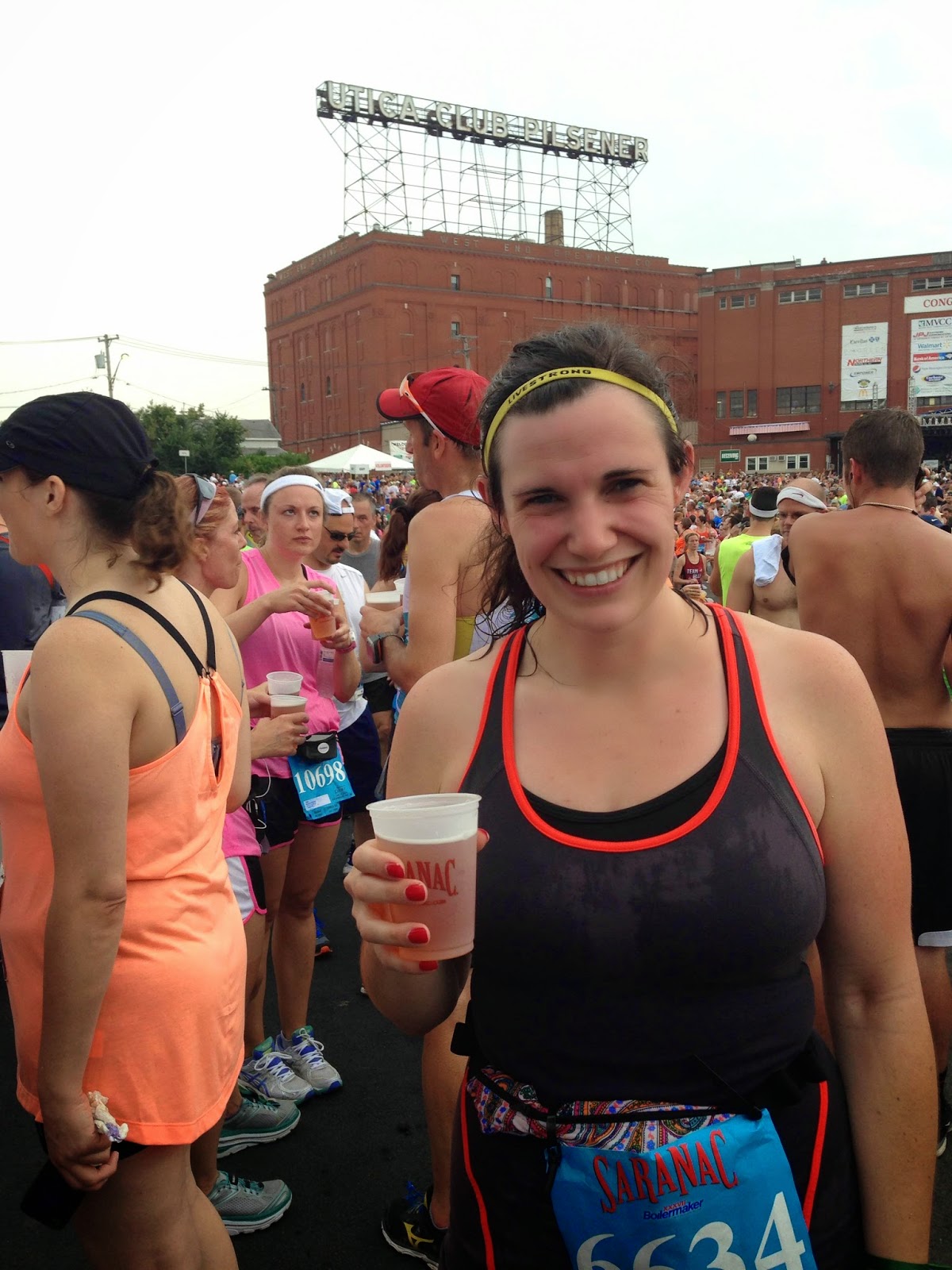