Last night when I was procrastinating going to sleep (why do I do that??) and scrolling Facebook from my phone in bed, I stumbled upon this video that was shared by a coworker, a TED Talk called "The importance of being a rookie." I watched it all the way through and them immediately wanted to watch it again (but I didn't) and also immediately wanted to get out of bed and start to write down all my thoughts I had about it (but I didn't.)

Instead, I jotted a few notes on my phone and went to bed, got up in the morning, went to swim practice, went to work, went to yoga, came home, ate dinner, and am now sitting down to write to you about the importance of being a rookie.

I've always been a fan of TED talks and have found inspiration in quite a few of them over the years. Both professionally and personally, people always seem to have amazing stories to share and lessons they've learned and I love the simplistic style of someone speaking on a stage to share it.

Throughout this talk, the speaker, Andi Stevensen, talks about the importance of being a "rookie" in your life and the things that you can learn by being a rookie. She starts by talking about skills and experience and about how that is something we strive for. Our careers and most areas of our lives reward skill, experience, and aptitude. However, we need to be sure to put ourselves in a position to be a rookie, for her, using the example of taking ballroom dance classes.

She talks about her fears of not belonging, people judging her, not knowing what to wear, or saying stupid things. She talks about the literal fact that she was the worst person in the room and had to learn something new in front of all new people. How scary that is, yet how alive it made her feel. The compassion she learned from it, and so much more.

It reminded me the entire time I was watching it of how I have been feeling throughout this past year with triathlon and learning to bike. And although I have gotten more comfortable in many areas I still have those fears and anxieties now and then. I've pushed through and gotten better at joining group rides. I have gotten more comfortable wearing the bike jerseys and shorts (the padding is needed in the shorts and those pockets really do come in handy on the jerseys!) but I struggled for months with the "I'm not really supposed to be here..." and "I don't belong in this group" and "Everyone is judging me just for coming out" feelings. The "imposter syndrome" as some have referred to it as. I still don't know the lingo around cycling or have all the gadgets or the fastest times, but I am letting that intimidate me less and less.

She comments in the TED Talk about how crazy it is that we all say to ourselves, "I'm not good at this so I shouldn't do it." Why? What if everyone who was not an immediate expert at (or even good at) something said that? It's such a real thought that we have, yet it is something that we need to all get over. Nobody is good at everything when they start it, you have to work at things. Not being good isn't a reason to not do something. Even if you never get to expert level, you have EVERY RIGHT to do anything at all that you want to.

It reminded me of the Olympics that I've been watching, specifically how Michael Phelps was just beaten by Joseph Schooling of Singapore. Schooling is someone who saw Michael Phelps as an idol and the photo has been circulating of him with Phelps as a young kid - a young fan. LOOK AT THIS PICTURE! 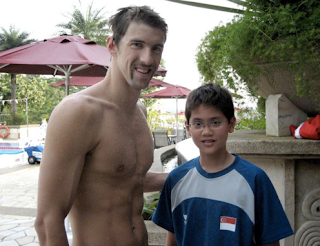 Imagine if Schooling looked at the people better than him, like Phelps, and thought, "Well I'll never be that good so I shouldn't try." Who would have ever thought that years after that photo was taken, he would exceed his idol and win gold at the Olympics? 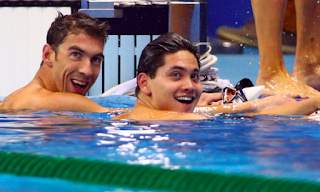 Even if he didn't ever get to that point, who is one to tell him that he shouldn't be there and try? (Which also refers back to my earlier mention of the Ethiopian swimmer finishing 17 seconds behind the winner in the 100 m freestyle and how much I admire him.)

As I watched this TED Talk, the entire time I thought about my struggle with biking and about being a rookie at it and at endurance triathlon in general. Of going to these World Championships in a couple weeks with only one 70.3 triathlon under my belt that I finished very averagely. I identified with all her fears and later all the lessons that she learns from taking these fears head on. It was amazing how much her words could have been my words.

Then it wasn't until the very end that she makes the point that allowing yourself to be a rookie at something opens up so many doors. It reminds us that we have more to learn, that we are malleable creatures and works in progress.  Being a rookie gives you "absolute and relative confidence" or both the confidence to say, "I now have the skills to do that!" (absolute confidence) as well as "Well if I did that, I can probably do this." (relative confidence.)

It wasn't until I heard the speaker say this that it even clicked in my head that cycling and triathlon wasn't the first time I had ever been a rookie. In fact, I've been a "rookie" many times and an advocate for living outside of your comfort zone for quite some time now. 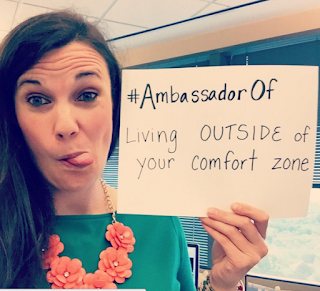 And for me, a lot of that journey began with running. Running was the first time I really felt like a rookie out there. And one of the most important things that I learned from my experiences going from a Coach to 5K program to running marathons (fairly well too!) is that RELATIVE confidence. It is that confidence that keeps me going at cycling and learning, trying, falling down (literally and figuratively) and moving forward. The confidence I gained from running has served me in so many other areas of my life.

It's given me confidence to do things that scare me. Things that require a 10 minute pep talk sitting in my car before I walk inside the front doors. My mom says to me every now and then, "I just don't know how you do the things you do! I couldn't do that!" but it's not true - anyone can do anything, even if it scares them. What if I had said to myself, "Well I'm not good at running so I can't run a 5K" way back when?

There are many times that I have to sit in my car and give myself a pep talk before I walk through the front door, which is something that the speaker talks about in this TED Talk. But I usually get myself inside. Or outside, in the case of group bike rides, which was something that scared me so much earlier this year and required many car pep talks. Just a couple weeks ago I had to give myself a car pep talk before walking into a group dinner at CHIPOTLE, because I was nervous about walking up to a group of people where I didn't know anyone to join an Atlanta Triathlon Club group event. Things scare me all the time, but I have developed a good amount of relative confidence over the years by taking them on one at a time.

And not everything you're a rookie at you need to see all the way through. Another car pep talk happened before trying a twerking class in Atlanta a few months back. I was so scared to go inside and was completely out of my element. But I wanted to try it and I didn't want to NOT try it because I was intimidated. So I did it. It wasn't my thing, but I have more compassion for seeing the other "rookies" out there for it.

Another car pep talk I gave myself that I can think back on so clearly happened a year and a half or so ago when I literally circled around a street block multiple times and sat in my car for a long time before walking into a random art show in Atlanta. I had reached out to and met up with the head of a local running group, one of the few people who had ever been warm and welcoming to me in Atlanta, but was still so scared to walk into this event that was completely out of my element. However, doing so helped me meet and get to know better a group of people who became my family and community in Atlanta. And I'm pretty sure the compassion that was bestowed upon me was due to these other individuals time "being a rookie" in their own lives.

What I think some people don't realize is that people aren't always built with natural abilities to do things, but they start small and allow themselves to be a "rookie." Joseph Schooling wasn't always a world champion swimmer and I wasn't always a runner or triathlete, but we both didn't allow ourselves to say, "I'm not good at that so I am not going to do it." Instead we said, "I am not good at that YET but I am going to keep working at it."

Now maybe Joseph Schooling was like a child prodigee at swimming and was always good at it, I don't know. That might not be the best example, but it made sense in my mind. Hopefully in yours too. But just in case, why don't you all just go watch this TED Talk and let me know, what are you going to allow yourself to be a rookie at?  As a former rookie in many areas and current room in much more... I promise you'll learn and grow from it.