My workout schedule has been exhausting (but fun!) and I have been trying to have a balance with my social calendar, which has kept me busy (but happy!) so it just seems lately there is less time to blog.

Oh and then there is this little thing going on called the Olympics and as you know if you've been around here a while. I have a little thing for the Olympics. I love the Olympics. The athletes. The guts. The determination. The beauty of the sports. The skills. The athleticism. I love seeing people from around the world compete on the biggest stage and the incredible stories that some out of that.

Last night I stayed up late to watch the swimming finals. And then some of the gymnastics. I cried last night watching Simone Manuel win and again today when I watched the medal ceremony. I marveled at Michael Phelps incredible display proving that he is the greatest of all time. And sat stunned at the perfection that is Simone Biles.

I haven't been super compelled to post a lot about the Olympics, but Simone Manuel inspired me to. So let me post a little...

- To start, Simone Manuel, who is the first black American woman to win an individual medal (gold!!) in a swimming event. Seeing her reaction to winning gave me chills and tears to my eyes. She came out of nowhere and pulled out a W, in a miraculous but not unheard of, tie for first place. It means so much to me to see her on top of that podium and hopefully inspire more young black girls to take up the sport. She's incredible in not just the sport but in how articulate and poised she was in her post race interview. Watching her hug her coach and teammates and mouthing along to the national anthem brought tears to my eyes. Her win means so much to me and so many others! 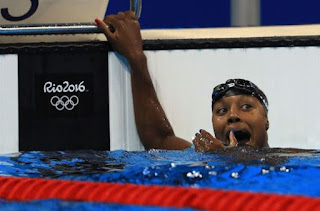 - Michael Phelps. I mean. Come on. Greatest of all time. If you've been around here a while, you know I have gone back and forth. I was Team Lochte for a bit in 2012 but then moved back over to Phelps. And now, I cannot even fathom how he is still SO GOOD and how much he just dominates this sport. He really is incredible to watch and whether or not you like him as a person, his complete dominance is undeniable. I have loved watching the showdown last night between him and Lochte in the IM. Or him and Le Clos in the butterfly. And taking back the 4x100m relay. My gosh.  The man was born to swim.

And speaking of being born, why is Boomer always in his mom's baby-carrying thing? There was no babysitter? Or even just in a car seat?  My guess is that it is for the TV cameras, but maybe I'm just cynical and they want to be able to say that he was there for his Dad's wins in the future. I'm just sick of seeing the baby in the crowd. Cool, you had a kid. Good job. Let's see the swimmers!!

- I just can't get enough of the swimming in general. I was literally yelling at my TV for Lilly King to beat the Russian doping girl. All that finger wagging and sass was just incredible and I am so glad that King fought it out. I've also been reading a ton about the "Iron Lady" in Hungary's Katinka Hosszu. First off, her name is amazing. She is really dominating and I know that she's also been having some controversy over her relationship with her coach/husband. Maybe I am not being a good woman supporter here, but I don't mind that her "coach" yells at her. I just finished reading Chrissie Wellington (English 4x World Champion triathlete) autobiography and her first coach whipped her into shape as well. Some people do better with that type of pressure. Now, I don't know her, her relationship, or what it is really like beyond what I have read, so I am not really in a place to judge. But I'm not as super outraged as others seem to be. She is a beast in that pool though and I'm impressed.

- Isn't Simone Biles just perfect? I couldn't stay up last night to watch them on TV but watched every one of her all around finals today and they were for the most part absolutely perfect. The girl is incredible and I love her personality and family.

- I have been reading a lot about the sexist commentary during these Olympics games. People have always been sexist with female in sports. It sucks and the stories continuing to come out over and over these games are disappointing. But then again, reporters can do and say dumb things regardless of what they are talking about, like the Canadian reporter who thought that Lochte was Phelps and announced him as winning the IM. Woops!

- These games I was also inspired by Ibtihaj Muhammad, who was the first American to compete in an Olympic sport wearing a Hijab. And Robel Kiros Habte, the Ethiopian swimmer who finished 17 seconds behind the first place winner and did it with THE BEST attitude.

- Did anybody else catch that 41 year old gymnast from Uzbekistan, Oksana Chusovitina??  I cannot believe she is still competing at that level as a gymnast at that age. That is incredible to me. This is a sport where countries have gotten in trouble for sneaking in TOO YOUNG athletes in order to get an advantage, and this woman has children the age of her competitors. 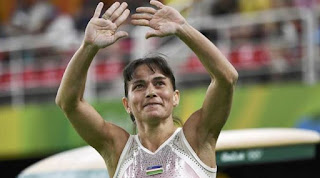 - I spotted this article about the weirdest sports in the summer Olympics. I want to catch some of them on TV at some point but I doubt I will since I only have main NBC and have already worn out the free streaming services. Speaking of which, why do they not let you pay for JUST an Olympics viewing package like they do with Tour de France?  That is something I would 100% pay for.  I don't want cable for the one time every 4 years I want to watch TV nonstop. But anyways... trampoline jumping?? Handball?? I have been reading about steeplechase and find that so interesting. As well dressage, which this article calls "horse dancing" and made me laugh out loud.

- Finally, I totally love this page on Google Trends during the Olympics. Did you know that people that have searched for cycling also searched for rice cakes? Also the searches for "easiest Olympic sports" has skyrocketed 1450%!  These fun little facts are all over the Google site and I love it.

This weekend I will be consuming as much Olympics as possible. What have you been watching on the Olympics?  What stories are capturing your attention? I love the stories in this sport. There just keeps being more and more interesting stories out there. I saw the two sister swimmers competing against each other in the swim and during the marathon there will be a set of TRIPLETS who are all racing against each other. How does that happen?