Hi everyone, sorry I've been a disappearing act on here lately.  It's hard to get back into a routine after traveling and usually I post on here in the evenings, but with only having a 2 day week last week... well, things got discombobulated.  I had the time though.  I've just also been a bit at a loss for words, having a hard time putting thoughts together lately.  It was a really tough week with the funeral of my friend Kelly, and on Wednesday I received the news that a close friend's mother had passed away.  I just haven't really felt like writing but am forcing myself to now because I think I will feel better afterwards.

I had a really lazy long weekend for the 4th of July and I feel a bit like I wasted it doing nothing, but sometimes you need that and I am trying to not feel guilty for it.  One of the exciting parts of my weekend included running the "Firecracker 4" road race in Saratoga on the morning of the 4th.  It's a fun, festive race and I got choked up a number of times with all the patriotism that was at the run.  It was a HOT 4-mile run, with temperatures around 90.  The first 3 miles were relatively shaded and lots of water stations but the last mile there was NO shade, NO water, and it was UPHILL.  It was brutal. 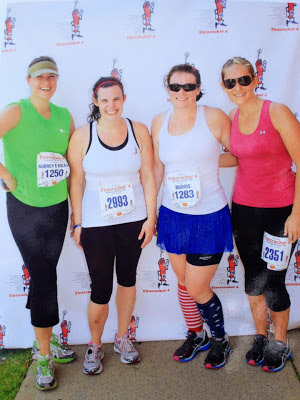 I spent the rest of the day in Saratoga after the race, including a couple naps at different friends apartments!  I don't think my body ever cooled down after that hot run and I felt pretty terrible throughout the rest of the day.  I was actually a bit scared because despite drinking water and replenishing my body, I couldn't shake a headache or feeling of lightheadedness.  Despite that, I had a pretty nice day eating meals at Druther's, Cantina, and enjoying some patriotic fro yo at Plum Dandy. 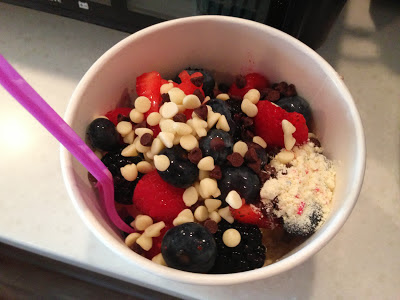 The rest of the weekend I spent a lot of time in my air conditioned apartment because it was just so darn hot.  I felt guilty spending the whole weekend that way but I had been so lightheaded and felt so sick on Thursday that it really took me a while to shake it.  I did spend some time on Friday at my friend's pool and met friends out on Friday night for a friend's going away.

However, the highlight of the weekend was the BBQ I threw on Saturday night.  I had a great group of friends over for burgers, hot dogs, chips, vegetable kebabs, corn on the cob with a lime chili butter, edamame and black bean salad, and lots of cookies, ice cream, and beer.  And, one friend brought over a watermelon, feta, and mint salad, which was really delicious!  I apparently didn't take a single picture the whole night but there was lots of good food and shenanigans to be had.  The night included water balloon and water gun fights, some Apples to Apples playing, and lots of conversation and hanging on the porch.

Midway through any party or gathering, I start to turn in to "game mode" and love organizing and playing games.  Apples to Apples is usually my go to but lately I've been hearing a lot of great things about the game "Cards Against Humanity."  My friend Heidi and I have been talking about it because she is my usual game playing partner in crime.  Yesterday I went to 2 different stores looking to buy the game but then when I looked it up online I realized that you can't buy it in stores!  You can either order it online or make the game yourself.  This is definitely going to be on my to-do list before my next gathering!  Is there anything that you guys recommend?  What are your favorite party games?

I'm going to recap my trips soon, because I want to document them on here.  But for now, I am going to wrap this up.  Hope you had a great fourth of July and weekend.  Hugs and happiness to all.