It's fun to every once in a while have a weekend where you get to try new things and go on an adventure in your own city. This weekend was one of those for me.

After two back to back weekends of traveling for weddings, I was looking forward to having a relaxing weekend in Atlanta. It turned out to be a really fun weekend, as well as a relaxing one.

Friday afternoon, Brick came over to have an afternoon work party with me and hang out in the early evening. Our schedules are going to be out of sync for a little while, so we are trying to grab as much hang out time as possible. Unfortunately, I was pretty exhausted from a week of work and tough morning workouts, and ended up asleep on the couch. Woops! At least you know it was relaxing.

My weekends don't tend to be much of a break from early mornings and this one was no exception. I started my Saturday bright and early meeting a group of runners in Atlanta for a "solidarity run." As the organizer said when we gathered together, many of us grieve and mourn and heal and find community in the act of running. So with the events of this past week, a solidarity run, in remembrance of all those who lost their lives due to senseless violence, was much appreciated. 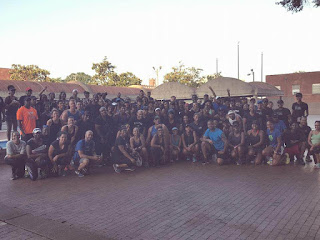 It was great to catch up with friends I hadn't seen in a while and also have some moments of reflection at the Martin Luther King Jr. Memorial site. I sometimes forget that I live in such an amazing city that played such an incredible role in the civil rights movement. There is so much history here and the MLK Jr. Memorial is an incredible thing to have right in your backyard. 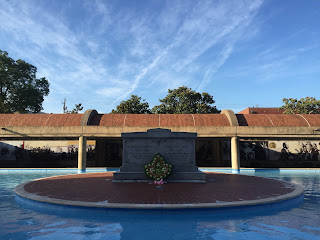 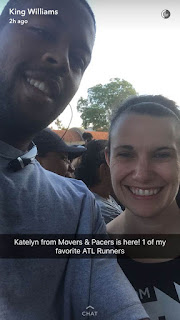 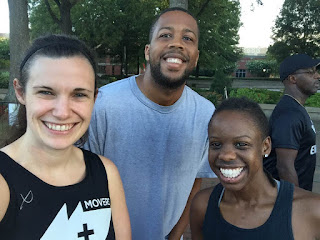 The route was 3.5 miles, which was challenging, with a number of hills packed in, and then I kept going for another 1.5 to get to 5 miles for the day. It was supposed to be a 8 mile day for me, but I've been feeling some pain in my left hip and decided to take it easy rather than try and hit the number and potentially aggravate it more.

I came home, iced my hip, watched some Tour de France, ate breakfast and hydrated, then got ready to head out with my friend Janet on an adventure day. Both of us had been wanting to try an Atlanta summer bucket list staple of "shooting the hooch" or floating down the Chattahoochee River in inner tubes. Generally done in big groups and with a cooler. 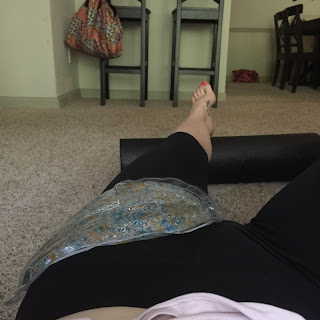 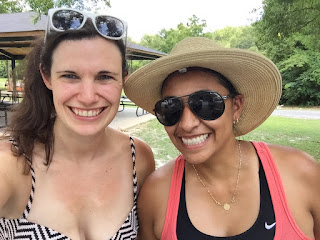 It started out a little iffy as the registration was totally chaotic. We weren't entirely sure what to do, what lines to get in, what we needed, or basically anything. But after a bit of standing around and being patient and forking over some moneys, we ended up with two inner tubes along a path to the river. It seriously was the most confusing process ever, but whatever. We got through it.

We left our phones in the car, only bringing with us a couple plastic bags with snacks and water and some beers. Then toppled into the river (literally) off of a dock and set out on an adventure down the Chattahoochee! 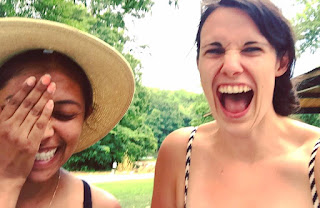 I have no pictures from being out on the river but it was really beautiful, peaceful, and the current is VERY slow. At times we were unsure if we were even moving and I often rowed or walked us down the river (it was also incredibly shallow.) There was great people watching, float scoping, and endless amounts of sunshine and beauty to take in.

There were a number of moments were we felt like such the slackers out on the river, with plastic bags tied to our raft handles holding our snacks and beers. With no phone to know what time it was or music to play. No sunscreen and no idea how far we'd gone or how much further we had. It was a time where we had to revert back old school and have actual conversations and it was pretty freaking awesome. 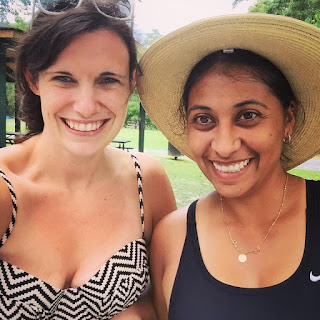 When we finally got to the point where we disembarked and got off the rafts to take the shuttle back to our cars. We took bets of what time we thought it was when we'd return to the car and turns out it was about 5:45 and we had spent about 3.5 hours out on the river. I was a bit sunburnt and we both were tired but it was an awesome, awesome afternoon. 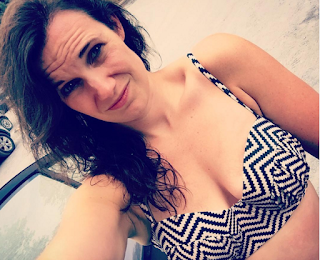 We took notes throughout the day of what we'd do differently if we were to go back, so we're basically pros now and available for leading guided tours down the Chattahoochee if anyone is interested!

Following the river adventure, we got some food at a restaurant near my place and then I returned to my apartment to spend the rest of the night on the couch. I was wiped from being in the sun all day and also needed to be up early.

My Sunday started earlier than my normal weekdays with a 5:00 a.m. wake up time to be out the door at 6:00 a.m. to head out for the Georgia 400 Hospitality bike ride. When planning out my workouts for the weekend, I switched around to do a long run on Saturday and a long ride on Sunday, specifically so I could participate in this event. However, it also worked out really perfectly because it allowed me join the solidarity ride, as well as have my day free to shoot the hooch on Saturday.

The Georgia 400 ride is an annual bike ride that attracts a lot of riders because the beginning of the ride, the Georgia 400 highway, one of the major highways in and out of Atlanta, is shut down and cyclists are allowed to ride on the highway! Georgia 400 is one of the busiest traveled roads so there is no way in the world this could ever happen any time besides 7:00 a.m. on Sunday, but even then, it's pretty amazing that they do this. The ride has a 10 mile, 27 mile, 45 mile, 62 mile and 100 mile route and they are all supported with rest stations every 10-15 miles or so.

We arrived at around 6:30 a.m. and checked in for the bike ride then lined up. There were TONS of cyclists there and we were way in the back. The first mile we were barely rolling, and it was WAY crowded for the entire first 10 miles.  The first 10 miles were a little rough because that is what most of the inexperienced cyclists, just out there to be able to ride on the highway and get the experience, were doing. There were a couple steep hills right in the beginning with lots of people walking their bikes up and crowded roads. Luckily, there wasn't really any road traffic at this time though. The most shocking thing for me was that there were a number of people out without helmets. What?! I couldn't believe people were riding on the roads without helmets and that the race organizers allowed this. 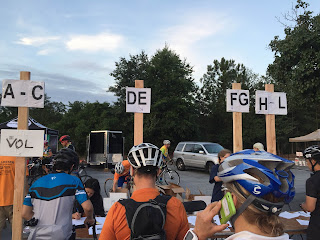 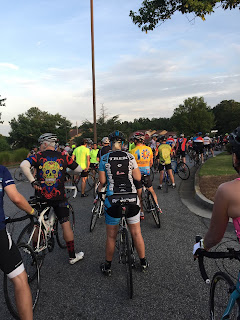 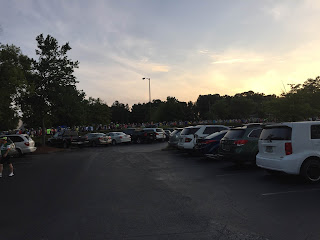 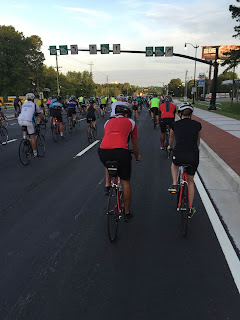 The coolest part was about a mile into the ride, we entered into the on ramp for the Georgia 400 and rode a portion of the race with the highway completely to ourselves. I loved it! It was an amazing sight with the sun coming up and I snapped one picture and then just took it all in. I was really happy that it came out not blurry because I wasn't looking at the picture quality midride. 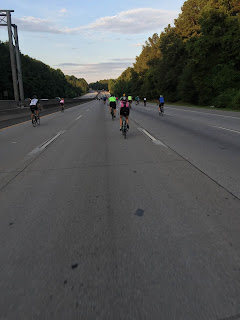 The rest stops throughout the race were awesome. We stopped at every one of them and I tried to take some pictures. They all had food consisting of peanut butter and jelly and peanut butter and nutella sandwiches, oranges, bananas, rice crispies treats, pretzels, water, ice, Gatorade and bathrooms. If only every bike ride I did had this type of spread! Or, at the very least, the ability to refill water bottles. Having cold water throughout the ride was such a luxury today. 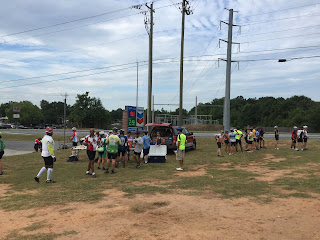 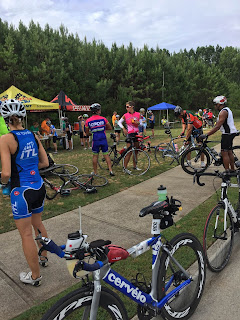 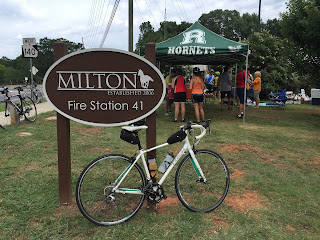 The ride was actually really challenging for me with almost 4000 feet of climbing. There are 3 major hills that were around 50 miles in that everyone called the "Three Sisters" - the first one is huge and then middle sized and then smaller, but all with pretty steep inclines. These hills are only for the riders doing 62 or 100 miles, so it is mostly experience cyclists, and there were a number of people walking up each of the hills, as well as a couple climbs right before the finish. I'm sure it was hard for them, but it was a little bit of a confidence boost and adrenaline kick to me that I was still going strong even this far into the ride. 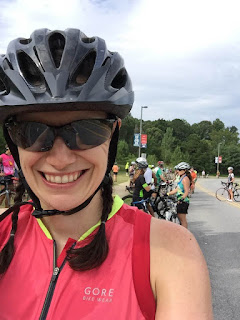 One of the things that saved us throughout the day was that for the majority of the ride, the clouds were hiding the sun, protecting us from that extra bit of heat. Towards the end the sun was out and shining, and I was a little worried that my sunscreen that I had put on at 5:30 a.m. was no longer effective as it was now nearing noon!

The whole thing was an adventure to do this type of ride and I really liked riding a new route that was unknown to me. I was miserable for a good portion of the ride but all in all, it was pretty fun. My pace definitely slowed at the end, I was tired for sure. My hip and knee gave me a little bit of twinges of pain, but was mostly good. We even have the unique and pretty cool experience of having a deer run across the street, literally right in front of me. It was crazy!

Anyways, when we got through all the hills, they had a band and a big finish line set up and all sorts of post race food. It really was such a cool event and my first bike ride of this type. I would definitely be open to doing more and it was a cool way to get in the miles. I think if I were to ever build up to riding 100 miles, a good transition into it would be doing it with a supported ride like this. It is so difficult to manage and think about all the nutrition, water, and things that could go wrong on a 100 mile adventure. However, the support throughout this whole day was great. They even had roaming mechanics! 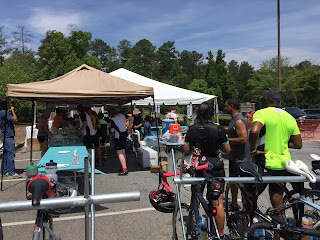 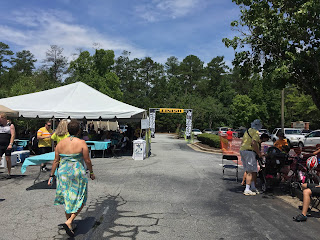 Instead of eating the food at the finish, my friends and I head out and got post race burgers. Or at least some people did. I went with a salad with grilled chicken on it because I am trying to be a healthy human being, but more on that later...

This was just the second time I have ever ridden this distance before, and it was more challenging I think due to the climbing in this route and also just not knowing the route. However, I did stop a number of times throughout, which makes it feel like cheating a little bit to me since when I ride this distance during a race, I definitely do not intend to take long breaks for peanut butter filled pretzels and nutella sandwiches (about that being healthy thing, woops.)

It was a really wonderful weekend with lots of new things and lots of adventure and friends. This is exactly the kind of summer training weekend I imagined for myself at the beginning of the year so I am really happy about that. I hope that you all had a great weekend as well! 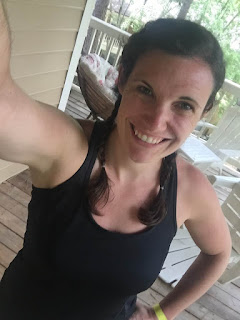