Earlier this year, I signed up for the Atlanta Track Club.  It was like $25 or something like that, you got a free hat, and you had guaranteed entry into the Peachtree Road Race.  That was enough for me.

What I later learned and has earned my money's worth, is that the track club puts on a lot of races that are free for members.  I love free things.  Don't remind me that I paid for entry earlier this year.  The races are still free!

So when I found out a bunch of my friends were doing the Decatur Dekalb 4-Miler race on Saturday the 18th, when I saw it was a free race I signed up.  As the race got a little closer, I started to feel like, "Crap, do I really want to do this?"  I haven't really been giving myself many rest days and I wasn't sure when I was going to do my longer run over the weekend so I just felt really unsure of it.

When my alarm went off in the morning, I was still really unsure of it.  I almost didn't go.  It WAS free, so it wasn't as if I would be losing anything.  However, I had told all my friends I would be there and I don't like to not do things that I say I am going to do.  Plus, one of my friend's moms was visiting from out of town and I like spending time with people's families and all that jazz. 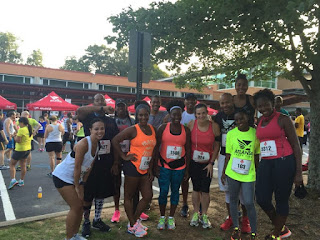 I got over to the race and as I was driving there thought maybe I would even just run my 3 miles before the race started (I was planning to arrive there about an hour early.)  As soon as I met up with my friends though I threw that plan out the window because I was having fun just hanging out with them.  I then started to think about how if I should run fast or not.  I really wasn't feeling it for whatever reason but also had a small goal in the back of my mind.

Four miles is a weird race distance.  The only other 4 mile race I have done is the Firecracker 4 run that takes place on the Fourth of July in Saratoga every year.  It is the race that I first ran with Jess and Aubrey a few years ago, where we went out to lunch afterwards, I met Jess's adorable kids for the first time, our friendships essentially started and the year that "Katelyn's School of Smiles" was founded by Aubrey. 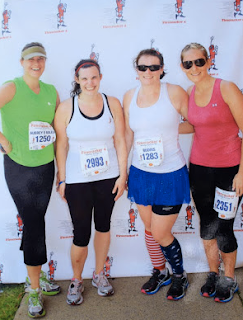 The next year, after having run a marathon together, Jess and I ran the Firecracker 4 again in tutus. 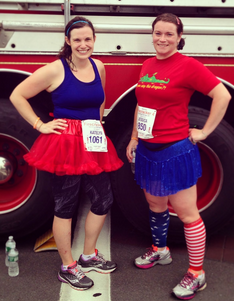 Anyways, enough about reminiscing.  Let's get back to the 4-mile distance and the fact that two years ago I ran 4 miles in 40:40 and then last year I ran the 4-mile distance in 36:31.  This year, I didn't run that exact race, but I knew in my mind I could beat that time if I tried hard.

Since I have been working on speed, I have now set personal best times in every race distance this year (except for the 15K.)  I would love to try and have the goal of having all my personal best times in the different distances be from 2015 so I had that goal in my mind.  But I also thought it would just be fun to run with my friends, something I don't usually do during races because I get too focused.  I was back and forth up until when we were at the start wave.  I didn't walk to a faster pace wave and stayed with my friends saying I was going to take it easy.  I also mentioned the goal that I had and my idea of beating 36:31 on the race.  "What??" they said.  And encouraged me to not be lazy and go after the goal.  So, with a last minute push from my friends, I decided to try and go for it.

I knew the time that I needed and rather than run all out crazy, I figured I would just try and get under that goal.  The course was fun and went by pretty fast to be honest.  There were some pretty neighborhoods, some rolling hills to keep my mind and body at attention, and a few friends out on the course that I ran into.

I felt good for the majority of the race until the very end, I kept checking my watch and my pace, which I usually don't do during a race but I actually didn't want to be running any faster than I necessarily needed to.  I was hoping to just get under the time I needed to from the last 4-mile race I did.

The last leg of the race felt like it took forever, but I pushed across the finish line and was totally surprised to see my time of 33;49.  Apparently I am learning more than ever lately that I really suck at telling time and pacing and distances. I also messed up our run this morning, but that's another story.  Anyways, my attempt to just get under 36:31 ended me with a 33:49. 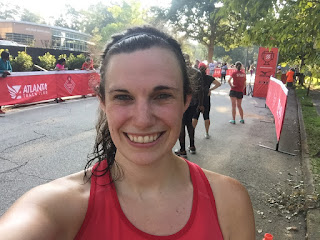 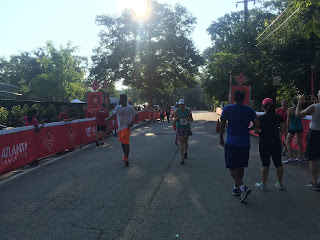 It seriously shocks me every time what these numbers are you guys.  It truly does.  I hope that comes across.  Because two years ago I ran a 4-mile race in July in a total time that is 7 minutes slower than what I ran this past weekend.  I know it is stereotypical, but it is true that when you lose weight or go through changes, it is hard to see yourself in the new light that you're in.  I always see myself as the slow, chubby, out of shape girl and just set out to finish.  It is exciting and fun to see my times increase but also puts a whole new level of pressure on me, or that I put on myself. 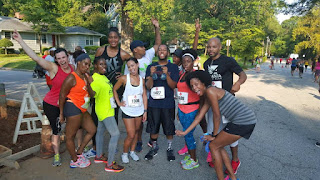 I had a conversation with my friend about the fact that I have a "race speed."  Because I do not do my training runs at that pace at all!  However, I somehow kick it up a lot during races.  Should I be pushing harder during training?  Should I be running those paces every time?  I mainly take the approach that you cannot run at max capacity all of the time.  It is not healthy for your body or your mind.  I like training for races because it does give me something to push towards.  I think having a race pace is a pretty normal thing for most people and lately I have been working to be sure to push my pace and effort during training as well - which I am sure is helping impact these numbers I am seeing during races. 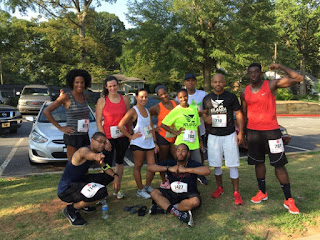 I've mentioned before that rest is so important.  You can't go all out all the time.  Your body needs time to recover.  A trainer wrote on Facebook the other day, "Remember - muscles are torn in the gym, fed in the kitchen, and built in bed."  The rest time is when your body and muscles recover and build themselves back up after you tear them apart during workouts.  If you're only tearing, you will get hurt.  I don't claim to be an expert, but I believe this to be true.  And the same goes for diet, I think you need to keep your metabolism guessing every now and then, so just totally cutting out food and calories and going to the extreme there, hurts you in the end.

Anyways, the race was a lot of fun with lots of friends there.  When I finished I waited for my friends to all cross the finish line, drank lots of water, and then we went out to get something to eat.  It was a delicious breakfast, although I was jealous of everyone's pancakes. 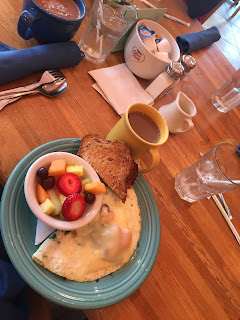 Another race, and another personal best time for me in a different distance!  It isn't a pace best time or anything, but glad I was able to beat my time from the last 4-mile race I ran.  Yay! 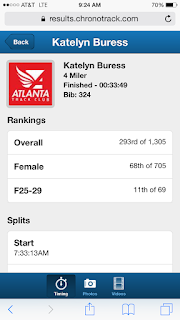