I'm on a pretty good spell of watching what I eat, planning out balanced meals and fitting even some indulgent foods into my diet.  The amount of exercise I am now doing doesn't hurt to give me some extra leeway and extra calories to be able to consume and still be within my goals.  And, for that I am very happy.

This past weekend I started off Friday night heading out to meet some friends at an Irish Pub to watch the men's Gold Cup soccer game against Haiti.  I planned to eat dinner there and once I arrived what really jumped out at me on the menu was a burger.  I haven't had a burger in a while and am trying my best to lately eat what my body is craving so I went for it.   I should say that I took the bacon off the burger and also only ate half the bun.  That helps, right?  It was soooooooo freaking good though guys.  It was delicious.   I opted to choose the french fries side to share with my friends, which I did, but also had a lot of myself.  And of course, you don't go to a pub and not have beer. 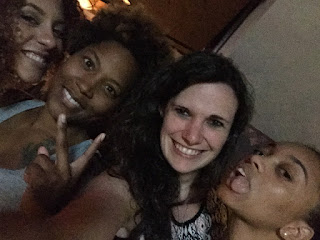 It was a really fun night out that ended up being a little later than expected, but it was fine by me because I got to sleep in on Saturday morning -- woohoo!  It is a rare occurance for me to wake up without an alarm lately.  Even on the weekends, I generally have races or runs or things to get up for so I don't always have an alarm free day.  I initially was going to get up early to do my long run on Saturday before the plans I had for the day, but due to some lingering soreness and an opportunity to do a group run on Sunday, I decided to turn Saturday into a complete rest day.

Well, not a totally complete rest day because nowadays my "fun" is also somewhat active.

On Saturday I competed as part of the Movers and Pacers team at the Atlanta Field Day event.  Which is exactly that - an adult "field day" like you used to have in school as a little kid with a tug of war, three legged race, wheelbarrow race, etc.   Except for that many of the events had a bit of a twist to them.  And music blasting.  And there were beer trucks. 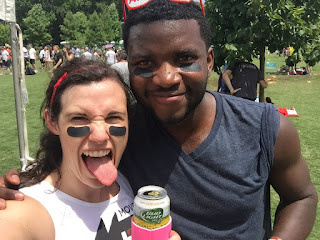 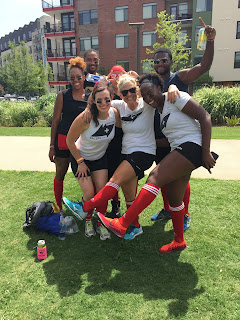 Not your average wheel barrow race (I think I got the better end of the deal...) 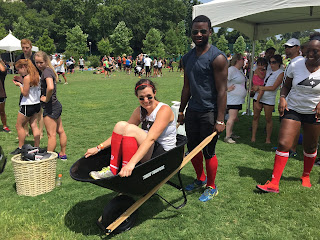 Let's just pretend the tug of war ended well for our team, shall we? 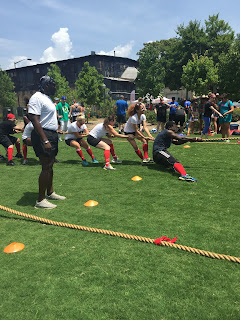 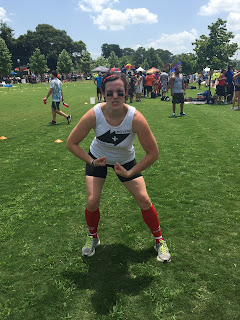 It was a really fun and silly day and at one point I just looked around to my friends and said that I was really thankful and happy to be living in a place that puts on events like these and have friends that participate in events like these. 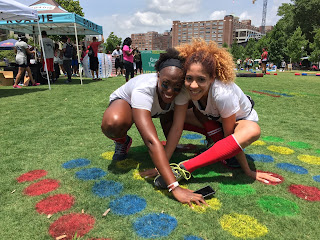 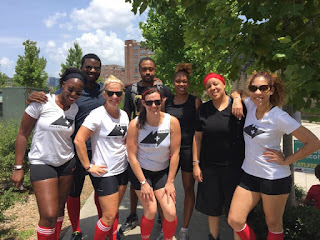 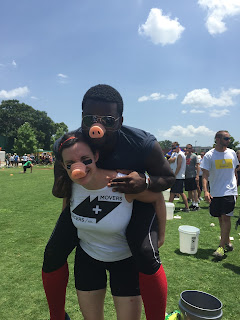 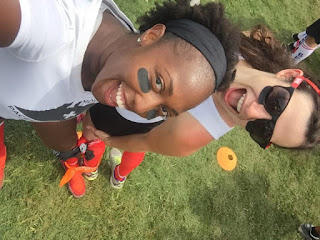 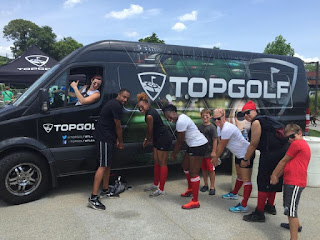 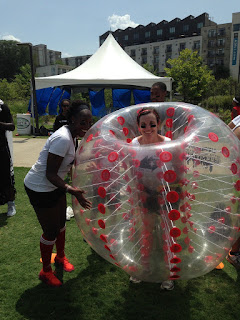 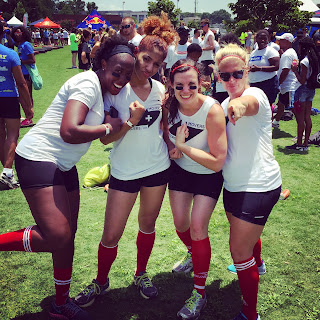 That evening I got home and cooled off in the pool because I had been in the sun ALL DAY.  I ended up missing some spots on the back of the neck when applying sunscreen that turned into a pretty painful sunburn that I've been nursing all week.  However, it was just around in the form of post-sunny day exhaustion on Saturday evening.  Somehow I found myself in bad place.  Sitting on my couch with a pound bag of M&Ms and watching really old reruns of the Road Rules Real World Challenge: Fresh Meat and feeling blah. 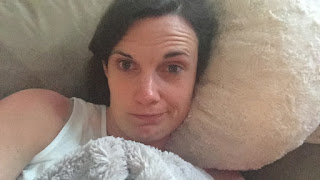 I luckily was able to shake the mood and dump the remaining quarter of a pound of M&Ms in the trash and went out and met a friend for drinks. Although the caloric intake of M&Ms vs. tequila probably was about the same, it was good to at least shake the bad habit of binge eating alone.  I don't clean up too bad I would say. 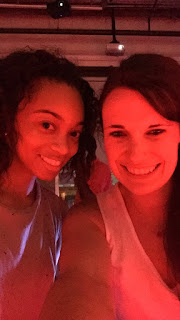 Despite all my motivation, dedication, and commitment, it is still easy to sometimes find yourself in a bad place.  It seems surprising, especially as I had otherwise planned the day SO well.  I ate a healthy breakfast (okay, kinda healthy, I did get a few munchkins when I ordered my iced coffee), planned ahead to bring snacks so I wouldn't have to eat from the food trucks at the Field Day, and then made myself some chicken and brussels sprouts for dinner.  But alas, it happens.  I am thankful for good friends who help get me out of the house.  Dinner was good though! 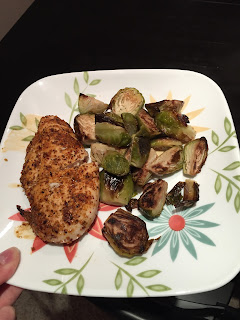 Saturday wasn't a late night either because I did have an alarm clock set for Sunday morning.  I joined a group of runners from the Movers and Pacers and from Running Nerds, the crew I trained with for the Publix half marathon in March, for a run on the Silver Comet Trail.  I love that it is so close to my house!  I had 10 miles planned, which I was able to knock out with some familiar faces along the course and finished my run in record time for me during a training run.  I wanted to see how I could maintain my pace through the longer runs, as I mentioned in my post last week, so I felt really good after finishing those miles. 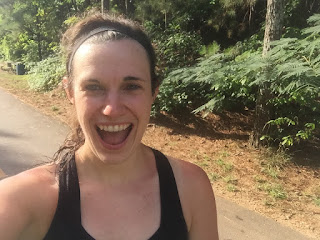 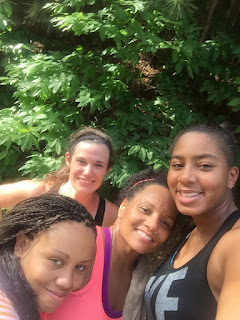 I celebrated with a bagel sandwich from the local place down the street which I sat outside and enjoyed while taking in the gorgeous day and letting the endorphins from the run sweep over me.  Listening to my body really is working out well for me because that bagel was exactly what I needed.  I actually came home after the run and realized that nothing I had in my house was really speaking to me and went out for it.  It was delicious!

To be honest, I didn't really track the points that I consumed this weekend after the M&M binge.  However, I did eat moderately throughout Sunday, having balanced meals low on carbs after the bagel sandwich in the morning.   I spent the rest of my day bouncing around to various other activities.

I stopped at a volunteering event to help make sandwiches for the homeless of Atlanta. 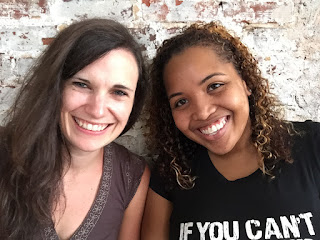 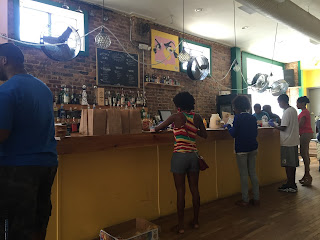 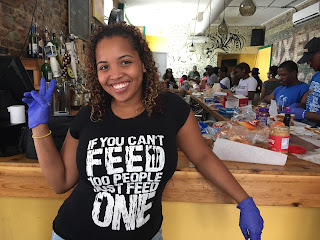 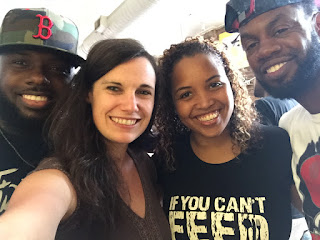 I went to the Farmer's Market and stocked up on tons of fresh vegetables, fruit, and local chicken to make food for the week.  Then I came home and prepped it all, recreating the quinoa salad that I had from Kale Me Crazy a couple weeks back to eat for the week, as well as preparing all my snacks. 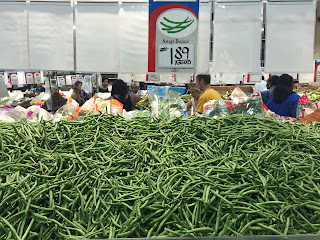 And then I went out for the Movers and Pacers flagship run.  I really and truly did not want to run, but I had two friends who told me that they were going to be joining for the run the first time and wanted to be there for that.  I vowed to walk/run and just do what felt okay.  I ended up staying with one of my friends and did a healthy amount of walking during the 2 mile route, so although my legs were definitely tired from the morning I just took it easy.  It's just so nice to see this crew on the end of the weekend/start of the week. 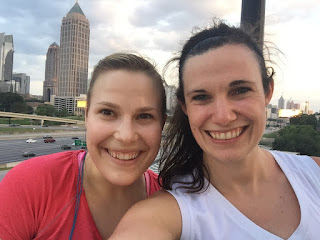 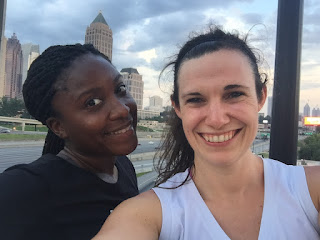 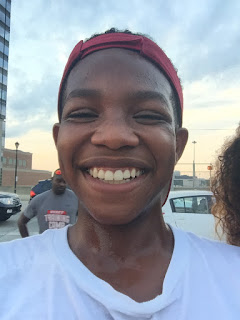 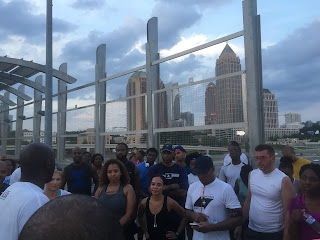 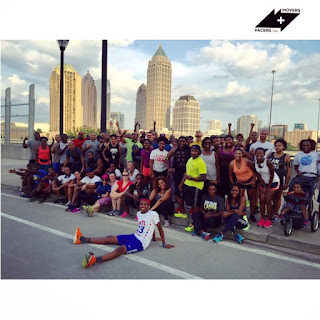 Since I'd prepared everything the night before, post run, it was a quick trip home and to bed and that was a wrap on another weekend in Atlanta!  Can you believe we're coming up on a year of me living here?  My Facebook Timehop thingy just told me that it was a year ago that I announced to the world that I was trading in New York apples for Georgia peaches and moving to Atlanta.  Wow!
at 10:26 PM