Did you miss me? Chicago Marathon Week 7 and 8 Round Up

It's been over a week since I wrote, and even when I did it was sort of a crummy post, so I am going to assume that all around the interwebs people just shouted to their computers, "I did, Katelyn! I did!"

Well, I missed you too, guys.

Over the past week it's been pretty busy, which is why I haven't really had time to write!  In addition to being nuts at work last week and working into the evenings, I then on Thursday after work flew to New Hampshire.  I didn't get in until very late, but it was all made up for in the morning when I woke up to these cute little babies to play and snuggle with all day long!

But before I get there, let's catch up on some training, shall we?

Following the week of really good workouts followed by the Sunday struggle run, I got back in the game with a number of good runs.  I moved my schedule around since I knew I would be traveling at the end of the week, to accommodate my friends, and to be sure I got a swim in.

Monday night I joined the Run Smyrna group for a 3 mile route throughout the neighborhood.  It was hot and I missed the turn I was supposed to do and my GPS wouldn't work right away.  But it was 3 miles and I got it done and I didn't die.  So, that's a win in my book. 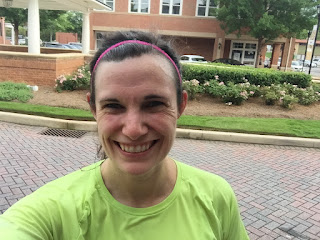 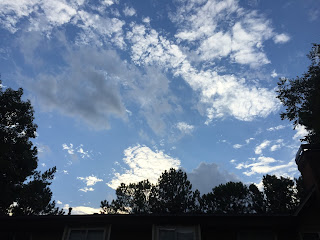 My mileage for the week was 3-6-3 and I moved the larger run up until Tuesday so that my friends would be able to join for it, since Tuesday worked better for them.  Turns out, it all worked better for me as well.  I hydrated a ton after my evening run and was ready to go Tuesday morning, running 6 with my friends Shayla and Janet, and we even included some hill repeats in the middle of the run! 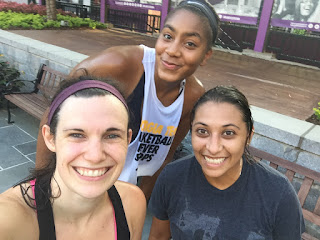 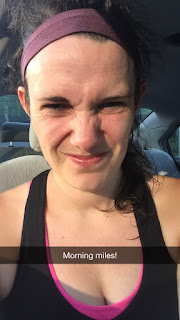 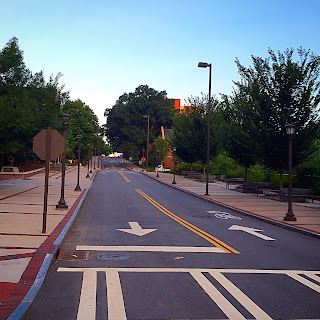 In addition, I had an exciting morning as when I weighed myself, I saw that I was at exactly 20 lbs less than the beginning of the year when I tried to focus on my weight again and using the scale after a year away.  The fact that I've lost 20 pounds is exciting and weird to me.  It feels like a huge number.  Like people should be stopping me at work or marveling when they see me, but I feel like the weight has been lost relatively unnoticed by everyone.  Myself included.  I see the scale go down but I don't always feel TWENTY pounds lighter.  Anyways, it was exciting for me.

I skipped the gym Tuesday evening as I ended up having to work late, and then after my successful redemption run with my friends on Tuesday, I did the Master's swim workout at the gym on Wednesday morning.  I've been enjoying these workouts more and more lately, although to be honest, it sometimes is a challenge to get myself there.  I made it on Wednesday and then went back in the evening after work to do a stress relief mini circuit workout I made up for myself.  One thing I tell myself a lot when I feel like skipping workouts is, "I wish I hadn't gone to the gym." is something that really, nobody ever says.  Even though it feels bad or hard at the time, it's always a positive in the end. 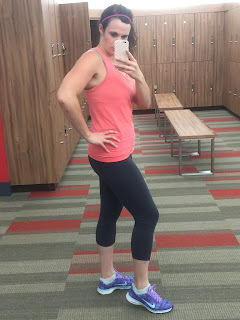 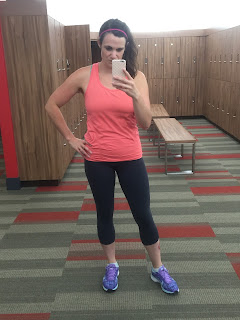 It is easier to meet people who I know are counting on me to show up, which is why it is great to have morning running buddies and on Thursday I had three! I met two friends from Movers and Pacers and one of their friends (not pictured) for a 3 mile beltline run which then led me into my trip away at the end of the day.

Friday was a rest day, followed by a race I did on Saturday morning - more just as part of training.  I found a race nearby to where I was staying in New Hampshire that helped me to get in some speed work as well as a swim!  It was a duathlon of a 1/2 mile swim followed immediately by a 5K.  It worked out perfectly to train and also to check the box having completed a race in New Hampshire!  Another state checked off the list!  I'll do a full race recap in another post, but it was a really fun one! 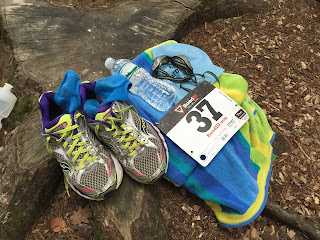 Sunday morning was my long run, which was 12 miles.  I had left my shoes outside when I got back from the duathlon because they were still a bit damp from that race and I wanted them to dry out.  However, they stayed outside overnight and it apparently rained so when I went to lace up, realized my sneakers were still pretty damp.  Generally I have spares I could throw on, but I didn't have any being that I was on vacation and all so just went with it.  I've run with wet sneakers before so that wasn't going to stop me, although not an ideal situation!

However, the cool post-rain air was amazing especially given what I have been running in lately and the temp was about 68 for this run, which felt great.  I carried a water bottle with me and I ran in New Hampshire through some rolling hills and was super proud of my pace, which was a 9:30 throughout them all.  I haven't looked at my splits yet but a 9:30 pace on a 12 mile run is AWESOME for me.  Marathon training gets REAL when the distances get beyond a half marathon.  Right now I could still effectively be training for a half.  However, I'm feeling good with the times I've been running and hope to continue to take care of myself to try and get there. 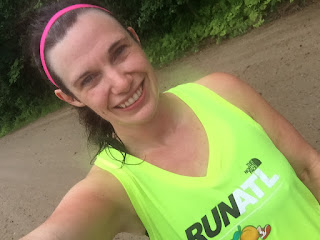 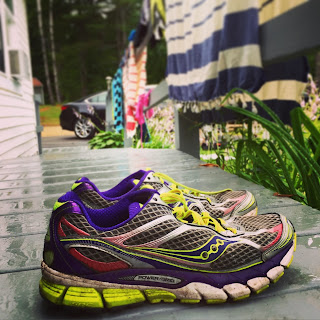 Monday was a travel day for me as I had a 6:00 a.m. flight from Manchester, New Hampshire to Orlando, Florida so there was truly not a moment to get anything in.  However, I started my day early on Tuesday getting back on track with a 3 mile run to kick off my 3-6-3 week.  I did 3 miles in Orlando by the Beach Resort hotel where I stayed, doing loops around the hotel boardwalk area which was about .8 miles around.  It was hot and a lonely run as I missed the morning group by a few minutes apparently. 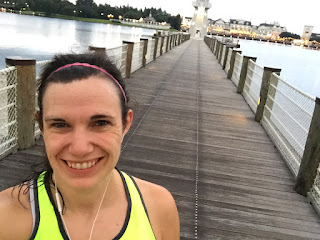 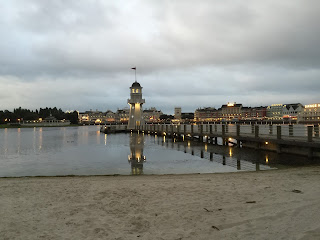 I shifted my runs around this week as well taking Wednesday as another rest day.  I don't usually have 3 rest days within a short period of time so it was a bit weird for me and felt really guilty about it, especially as I have been eating a lot more than usual this week as well.  I ended up deciding to make the most of my trip and not force myself to get up super early to do a super humid 6 mile run on Wednesday.  Before making that decision I confirmed with my friends that I would have company to do 6 miles on Thursday morning.  I let slept in (as must as you can sleep in when meetings start at 7am!) on Wednesday and then traveled back to Atlanta Wednesday evening, waking up on Thursday to meet my friends for 6 miles before 7:30 am. 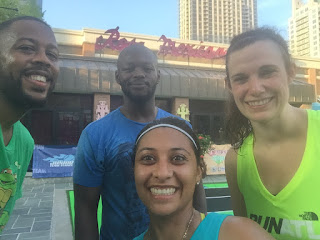 I opted to skip a Thursday PM workout to get caught up on some personal things and then Friday put in double duty with the Master's swim class this morning and a hot and humid 3 mile run this evening.  My workouts today were definitely a challenge as I really had to fight to get myself out of bed this morning and then out to run in the heat this evening.  There was a "feels like" temp of 98 degrees when I went out to run so I brought water with me, but even so my big lunch was bouncing around in my stomach.  I ran hills the whole time and my knee was in a bit of pain as well so it was a challenging run despite just being 3 miles.  I was glad to get it over with and a bit surprised and disappointed when I saw exactly how slow I was running.  However, it was an extremely hilly route.

So, that leads me to where we are now.  I've got a bike ride and a long run scheduled for the weekend to round out the training week.  I will check back in with a recap of what my weeks were like on the personal side, a bit of what I've been eating (spoiler alert: it's EVERYTHING and I am struggling to get that under control), my current goals, and a recap of the "Chunky Dunk Duathlon" in New Hampshire!  Hope you have a great weekend!