Okay, so I have been logging random articles and fun fact and random thoughts that I've had in a draft blog post and it is time to just clear everything out.  I know that this is totally random and probably the worst blog post ever, but I promise I will get back on my game soon.  I outdid myself with that blog about psoriasis so a few crummy ones are in order.

- First off, this Atlanta heat is brutal.  BUT, my body is definitely adjusting.  A few times I have walked out of my house in the morning to go run and though, "Brrr... it's chilly!" and then looked at the temperature to realize it is 75 degrees.  What?  Not normal to think that's "chilly!"  At least not for a New Englander!

- I am immature sometimes and get the giggles about teenager type things.  However, I've had this picture stored in this "random odds and ends" blog draft since my most recent trip to Arizona.  While out on a run, I had to stop and take a picture of this street intersection signs of "69th" place and "Jackrabbit."  Yup, this amused me. 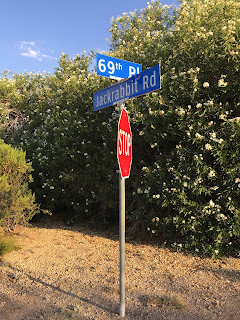 - Also, on the recent trip that happened right AFTER when I was in Arizona, in Saratoga Springs, I snapped a couple pictures of some great sidewalk signs.  I love motivational quotes and being told I'm beautiful, so it's obvious why that one stopped me.  Also, the beer one.  Love it and so true!  I have now survived two rather stressful days at work and wanted a beer soooo bad each night but have been holding off since I plan to indulge this weekend in ice cream and junk food so working to save those calories!!

Also, not pictured?  A recent sign I saw at Mexican restaurant that said "Soup of the Day: Tequila."  I loved that. 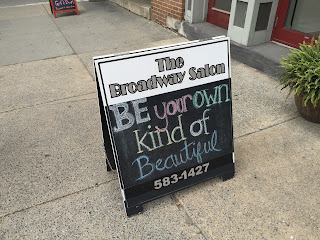 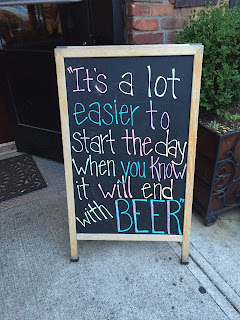 - I have recently started to refine my skills on Photoshop on my phone.  Yes, random photo editing on my phone.  It is sort of scary how easy it can be and part of a larger problem of now even more fake "is this real life" stuff happening across social media.  I am just having fun with it and promise I am not going to be doing anything too crazy, probably just fixing zits and things like that, but check this out... 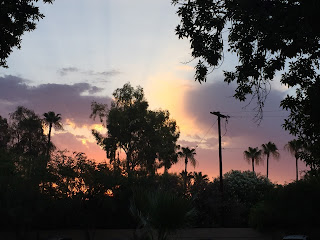 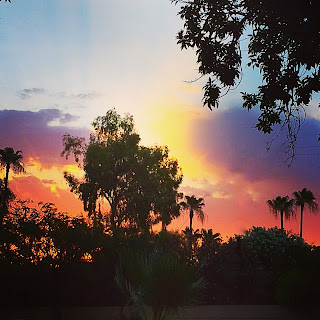 Did you catch that?  Not only did I enhance the colors and crop the image... I also removed the telephone poles from the picture.  ALL FROM MY PHONE.  I mean, as an old school photo kid, this is crazy to me.  I remember learning Photoshop in the classroom and magically being able to edit pictures in this way and feeling like the most powerful person in the world.  It was hard to learn how to do and took time.  And now?  I can literally just do this all from my phone within a few minutes.  Crazy!  I sort of just did it to see if I could.  But it's addicting.  The power is real, people.

- Recently I received a traffic ticket while driving the airport.  I was SO PISSED.  It was on my last trip, it was 6:00 p.m. and I was sitting in rush hour traffic in the middle of the city on 75.  For those of you in Atlanta, you know what this means.  We were barely moving.  I picked up my phone from the center console to look at the Google Maps app that I had open and check to see when the traffic would clear.  And all of a sudden the lights start flashing from the car kind of next to me.  I was given a ticket for using a phone while in a moving vehicle.  Because apparently stopped in traffic is a moving vehicle and looking at traffic is illegal.

I honestly wasn't aware of that since I use Google Maps ALL THE TIME to navigate.  So be careful out there people.

- Recently I asked my friend who lifts weights all the time how I could get a flat stomach and he said, "Cut carbs and sugar." And my response after a short pause was, "Umm.... and what are my other options?"  I may or may not ever get there but gosh darn it, I can't give up carbs and sugar.  That being said, I am consciously trying to cut back on soda.  I skipped it for about 3 weeks and then had some today and my stomach hurt.  I kept telling myself, "Remember this feeling!!!!"

-  If you would like to learn something about the Atlanta music scene and also about how to make it big in the music scene out of Atlanta (*cough cough* it is strip clubs), read this article.

- Did I mention this yet?  I know I said I wanted a Starbucks frappucino after my struggle run on Sunday, but lately I have been craving iced coffee at the end of my runs.  SO BAD.  My coffee intake has gone up dramatically lately. I am sure there are worse things that I could be craving so I am really okay with it.  I think about them the whole time I am running and man do they taste delicious when I finally get them! 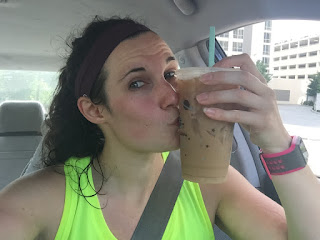 - And finally, for today, Runners World's recent had an article about "keeping it real" and runners showed their self portraits.  I loved it, but the link seems to be broken right now.  If you get the chance, Google it or something because it was worth it.

Happy Wednesday everyone!!
at 9:44 PM